We typically see half walls at stair openings, replacing railings and balusters, as well as in bathrooms. In remodeling we use half walls with glass, a lot more in showers, to allow in more light. Whether you call it a half wall, knee wall or Pony wall the issue is the same.  They tend to be wobbly and cause client complaints. No one likes a wobbly wall, cracked plaster, or cracked shower tile that results from wall movement. In this article we discuss the Best Method to Stiffen A Half Wall. Reinforcing a half wall can be accomplished easily if the floor joists run perpendicular to the half wall. In this instance, simply run a stud or two down into the joist bay and attach it to the floor framing. Reinforcing the Half Wall – How Many Attachment Points?

You can do this on every joist, or just a few. Attach each 2×4 stud to the floor joist, or to blocking between joists, with construction adhesive and 3” structural screws. Need More Half Wall Support? Add Blocking On Either Side of Stud

For additional lateral support, adding 2x solid-blocking, onto the floor joist, on either side of the 2×4 wall stud will add more stiffness, and support to the structural screws. [This is a common method in reinforcing 4×4 posts in deck framing.] Add Blocking Between Joists To Stiffen Half Wall

Additionally, if the joists do not run in your favor you can add 2x blocking to better position the 2×4 stud support you need. Use 2x framing and joist hangers to ensure a solid blocking connection. Sometimes installing the joist hangers “upside down,” gives you better resistance to pulling.

Using Threaded Rod to Stiffen the Half Wall

The threaded rod method works great when reinforcing a half wall, but is hard to do and super time consuming.  It requires using 1/2″ to 5/8″ threaded rod from the top wall plate down to blocking in the structural floor below.  The use of upside down joist hangers is recommended to add tensioning strength to the blocking. You can read more about this method here. 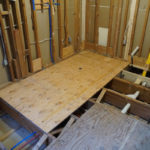 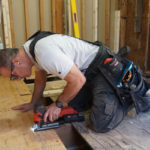 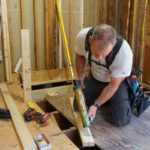 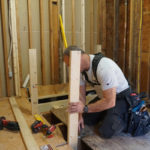 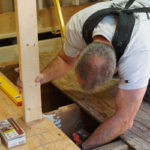 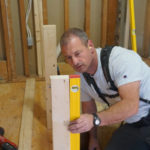 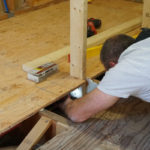 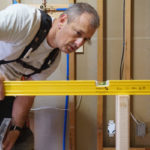 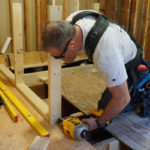 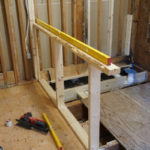 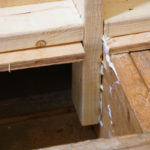 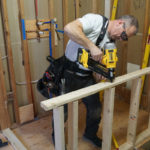 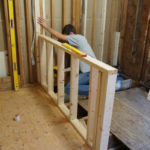 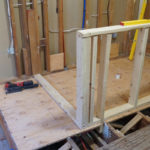 Cutting A Wall Down To Make A Half Wall