By John Peachey on Tool and Product Reviews, Weekend warrior

As a car owner, I frequently wash our cars to maintain their appearance. However, I have always hated waxing the 2 cars because it was such a labor and time-intensive project. I may have found a solution to this with the new Ryobi 18V One+ 6” Two Speed Orbital Buffer. With this Orbital Buffer, I was able to polish my entire car in record time and my arms were not sore at the end. This buffer is a win for any DIY car detailer! 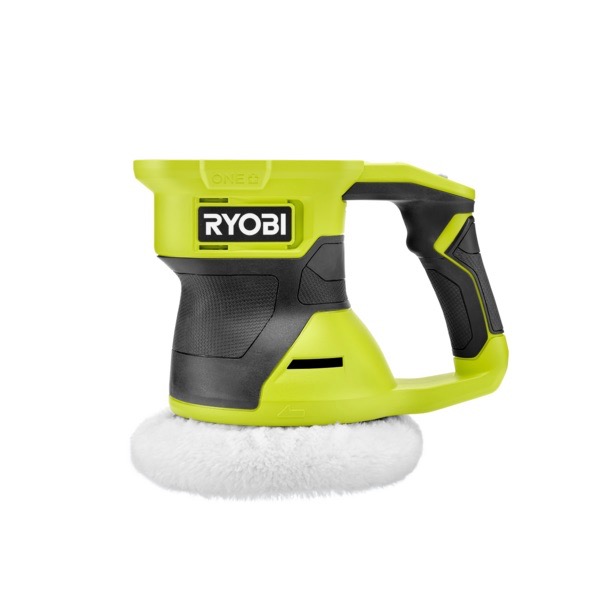 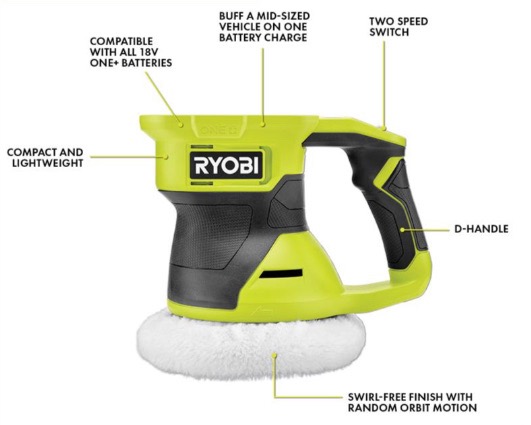 The Ryobi 18V One+ 6” Two Speed Orbital Buffer that I tested arrived with everything I needed to restore the finish of my wife’s car. The Orbital Buffer itself is 4.2 pounds in weight and just under 9 inches in height, 10.5 inches in depth, and almost 7 inches in width. The buffer has a single-side D-handle with a large barrel rubberized grip. It also ships with 2 bonnets—a 6” applicator bonnet and a 6” buffing bonnet. The reusable application bonnet is made of 100% terry cloth and the reusable buffing bonnet is made of synthetic tufted material. 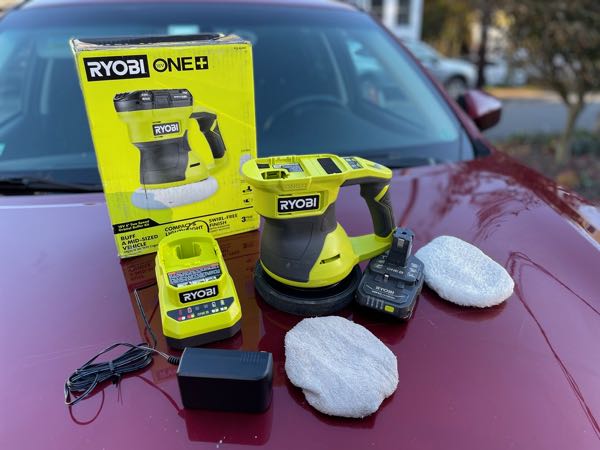 Installation And Use Of The Bonnets

When I used the Ryobi 18V One+ 6” Two Speed Orbital Buffer, I installed an 18V Lithium-ion 2Ah battery since it added very little weight to the tool. It is advisable to have the battery removed for safety when you are installing or removing a bonnet since the bonnets fit so securely over the cushioned 7/8-inch foam pad. I needed to use two hands to pull the formidable ¼-inch elastic binding onto and later off the foam pad. While some effort was needed to install the bonnet, the binding was so secure, the bonnet didn’t move at throughout my work. Having a 7/8-inch thick foam pad beneath the bonnet is reassuring since there is no need to worry about a hard plastic surface on the buffer coming into contact with your car. 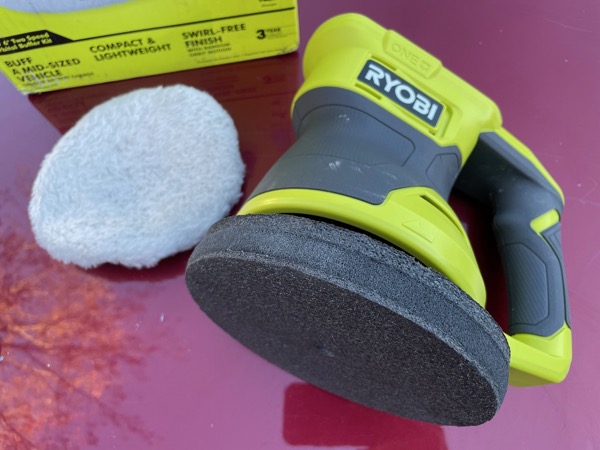 For my testing, I used a liquid Turtle Wax Polishing Compound on a Subaru Outback. When I applied the liquid compound to the Applicator pad, I followed the recommended directions by using 5-7 small drops spread across the 6-inch bonnet surface area. The bonnet material is thick enough that the liquid isn’t fully absorbed into the terry cloth. When I was ready to start polishing, I held the Orbital Buffer directly on top of the car’s surface. Forgetting to start the buffer with the bonnet on top of the car will result in the powerful motor quickly throwing the liquid off of the bonnet—I did this accidentally a couple of times! 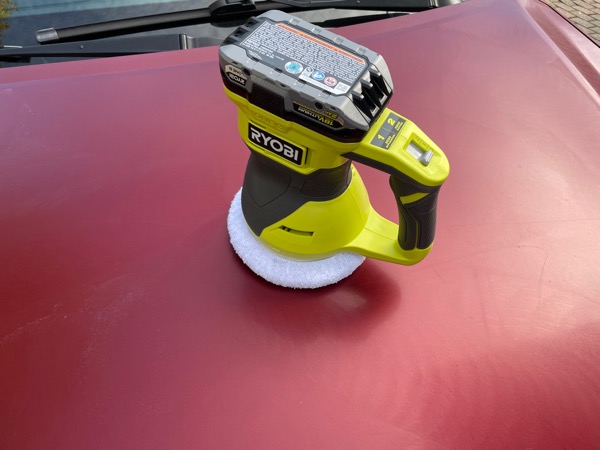 I used the Application setting at 3,000 OPM to coat the car with the polishing compound. The random orbit action of the buffer did a wonderful job of applying the polish efficiently and effectively. The Orbital Buffer also does the job very quietly as it operates at 59 decibels–on average–at 3,000 OPM. The buffer is lightweight and very well-balanced, making it easy to guide it across the car’s surface. The buffer could be easily controlled with one hand on the D-handle, but 2 hands on the buffer lead to more directional control.

The D-handle has a rubberized grip, as does the front half of the buffer’s body, both of which give your hands a more secure hold on the buffer. Controlling the buffer with one hand on the D-handle allowed me to easily extend my arm across the roof of the car when I was standing on a milk crate. At 3,000 OPM, the applicator head quickly applied the polish, and frequent reapplication of the polishing compound was required, though it only needed 3-4 drops for each reapplication.

Here are two videos of the Orbital Buffer operating in the Application mode: Video 1 and Video 2

The buffer was easy to navigate over the car moldings and uneven car panel surfaces. When I had to polish around the 2 mirrors, I found it easiest to turn off the motor because it moved too rapidly and often bumped the mirror. I was thoroughly impressed by how quickly I was able to coat the entire car with polish and I did so with very little manual effort. The Orbital Buffer’s brushed motor does all of the work as you steer it across the car’s finish. 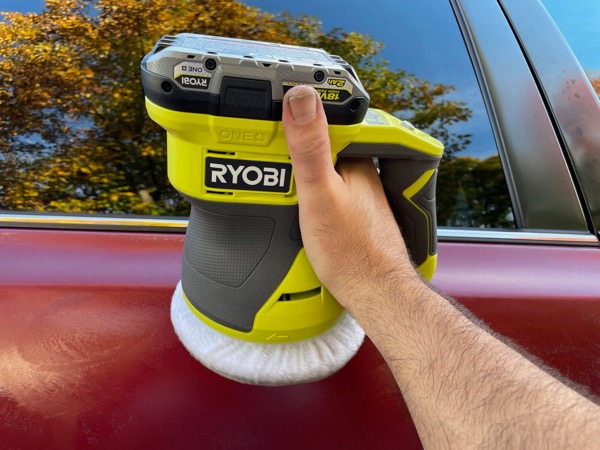 When I swapped out the application pad for the reusable buffing bonnet, it again required 2 hands to pull it over the contours surrounding the thick foam head. I believe this will become easier with time as the elastic binding stretches, but I also appreciated how tightly it grips the head of the buffer. Using the Setting 2 Buffing mode increases the power of the motor to 4,600 Orbits Per Minute. The decibel level only increased to an average of 67 decibels at 4,600 OPM.

I did feel that 2 hands on the Ryobi Orbital Buffer were best when buffing the polish off the vertical sides of the car, though one hand was enough to control the buffer on the horizontal roof and hood. The synthetic tufted material of the buffing bonnet was very soft and effectively removed the cloudy polishing compound from the car. The higher speed was a little too much near the mirrors, so I reduced it to 3,000 OPM or I shut it off entirely. Having a separate terry cloth for the tight spots near the license plate and the metal between the roof rack and the windows was also helpful.

Here are two videos of the Orbital Buffer operating in the Buffing mode: Video 1 and Video 2

As Ryobi advertised, the car was left with a very bright and swirl-free finish after I removed the polishing compound. My wife was very pleased with her car’s shine at the end. I was impressed that the entire job was done in less than 2 hours and I still had some battery life to spare. Having the Ryobi Orbital Buffer in my tool shed will absolutely result in me waxing our cars more often than I ever did in the past. 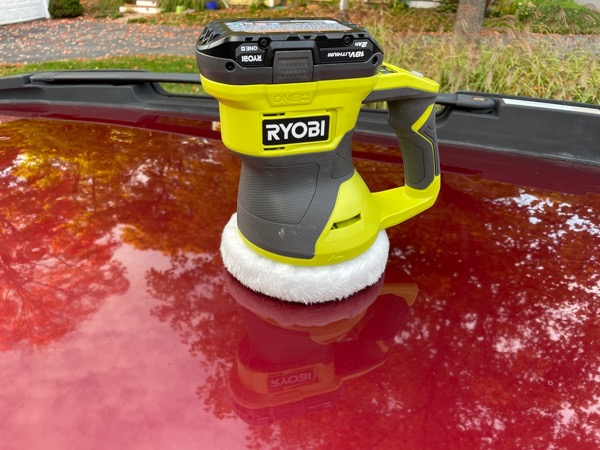 Maintaining the outside appearance of your car is not easy, especially in New England where the 4 seasons wreak havoc on your paint job. Washing your car is a great starting point, especially when it’s done with the Ryobi 3000 PSI Brushless Electric Pressure Washer. To really restore and protect your car’s shine, you need to put in some extra effort with car wax or car polish. If you want your car to shine like new again without a lot of physical effort or time involved, I highly recommend you get the Ryobi 18V One+ 6” Two Speed Orbital Buffer. Your car, your muscles, and your spouse will thank you.