Recip saws are a very useful tool to have available. I remember my first saw was only a 4 amp, Allen wrench blade change with a hi and a lo switch. When I upgraded years later to a 15 amp Recip saw, I found it to be more comfortable/ powerful.  However, others have complained about the size and weight.  I recently had the opportunity to test out the Ridgid compact one handed corded reciprocating saw on a job-site. So my first impression of this Ridgid Fuego Recip saw is how compact and slim line they made it. I also felt all of the weight was on the back end of the saw which made it well balanced and easy to maneuver. The micro hex grip provides a comfortable grip. There is a Velcro strap to hold the saw in place when it’s being stored in its case. The blades can be inserted 2 ways, normal and backwards (which means teeth are facing up).

My first task with the Ridgid One-Handed Fuego Orbital Reciprocating Saw R3031 was to cut ¾’’ off the bottom of 4”x4” studs 2’ on center and the wall was about 42 feet long. I was able to get a good feel of this saw at the end of the wall. After I drew my lines I fired up the saw for the first time. The power this saw has is solid and it didn’t jerk or move when the trigger was squeezed to full power. Upon placing the saw blade on the line, I quickly noticed how open the front of this saw was with almost no obstructions. The first 4”x4” I cut through I used the orbit action mode.

With the second stud, I shut off the orbit mode with the selectable switch and found the cut was very straight, smooth and the 9” blade did not flop around. The quick change feature for blade replacement was fast and held the blade securely.

When I was cutting inside of the building, light was scarce. The LED lights at the end of this tool made it possible to see without setting up extra lighting for one cut. At the end of this project the saw was warm to the touch but was still running strong.

What’s in the Box:

My one suggestion for improvement would be on the carrying case. I would of like to have seen a Velcro strip or a zipper to keep the blades in place behind the mesh net. The blades are to be stored on the lid of this carrying case and they actually fell out into the main part of the case when I carried it from place to place. I was disappointed because I liked that it had room for blade storage.

This saw worked out very well. I love the compactness and that I could control it with one hand. All the cuts I made with this saw were very smooth. The TRI- LED lighting I found to be an asset when following a line or just rough cutting. I was able to use the variable speed trigger to cater my cut to the material I was cutting. The power it showed me as I cut through 4”x4” felt like a traditional full size reciprocating saw but without the weight and size. The case is a soft shell, small and compact.

This saw would be essential to any trade that currently use Recip saws.  Some of the trades I can see benefiting from this compact size would be HVAC, electricians and plumbers. Ridgid also offers corded and 18v cordless models.

The Ridgid R3031 reciprocating saw can be purchased through your local Home Depot for $99.97.

For the last 10 years, Mike has been practicing as a general contractor in Rhode Island with his company MJH Construction. He obtained his LLC status 2 years ago. Even though his background is in doors and windows, his passion is for remodel work.

Mike is also a full time career firefighter and is a Lieutenant on Rescue and resides in North Providence, Rhode Island with his wife Jennifer and daughter Olivia. 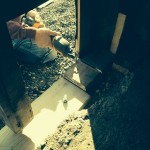 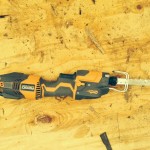 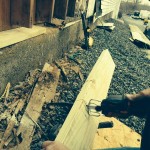 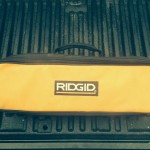