On small jobs a 12 volt impact driver is my go to tool for the majority of my driving needs. At 1,100 in-lbs of torque the Ridgid R82237K Impact Driver has plenty of driving power. Let’s see how it fared on the job-site. The look and feel of the Ridgid 12 volt impact driver is very solid. The motor and gear housings are a bit big compared to the competition but not huge. This somewhat limits the close quarters fastening potential of this tool which is unfortunate in a compact 12 volt model. It feels good in the hand with decent ergonomics with a fairly thick grip.

The on-tool battery gauge is a nice feature that turns on whenever you depress the trigger so you’ve got consistent information on battery life. However it’s location on the left hand side of the tool means lefties have to switch hands or turn the tool over to check the battery gauge.

The Tri-Beam LEDs are fantastic, they help minimize shadows that block your view and provide plenty of light for the task at hand. There’s a delay on the LEDs so they stay on for a few seconds after you release the trigger. With a light trigger squeeze the LEDs will turn on without activating the tool allowing you to see what you’re doing before driving. The included belt clip works well but won’t fit on thicker tool belts (think full-grain approx ¼” thick leather).

I used the Ridgid R82237K for assembling a deck safety rail and setting deck boards. As well as for patching drywall and a few other driving tasks.

I found that the Ridgid did seem to drive a little bit slower than other 12 volt impacts I’ve used which is to be expected given it’s performance specs. But it had absolutely no problem driving multiple 3” decking screws into PT lumber. And while it works really well for decking screws, small bolts, and lags I was also able to use it for driving 1-¼” drywall screws for a patch with really fine control to prevent tearing the drywall.

The Ridgid R82237K doesn’t have any problems that I could find. Everything just works. The chuck is easy to grip and use. Removing and replacing the battery isn’t a problem, the charge time is a reasonable thirty minutes. You’re pretty unlikely to have to wait for the battery to charge unless you are really stressing the driver, like driving a bunch of 2-1/2″ Timberloks. Compared to similar impact drivers the Ridgid R82237K is a bit bigger and has lower RPM and lower IPM, however, it does boast higher torque.

So if you’re willing to wait a little bit longer but drive that screw or bolt a little snugger or need to drive some slightly larger fasteners this is the tool for you. In my opinion torque is king with impact drivers because they’re what I get out for tougher fastening jobs. Even a 12 volt tool can drive smaller structural screws and long drywall and decking screws and the Ridgid has a huge amount of power for it’s small size. The Ridgid 12v impact driver is a great tool. It is feature laden, is easy to use and boasts the highest torque spec of the impact drivers in it’s class but still has the control to drive smaller screws as well.

If you’re a budget conscious contractor or an avid DIYer it’s hard to go wrong with Ridgid tools and this 12 volt impact driver is no exception. 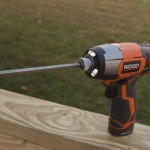 LEDs light it up. 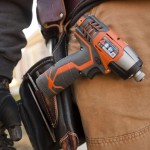 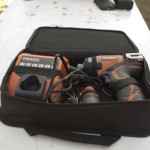