The RYOBI Benchtop Disc/Belt Sander is a valuable addition to any shop or jobsite.  Tools, both hand tools and power tools, can be divided into two classes depending on their relationship to the workpiece.  Hand-held tools: all hand tools, circular saws, electric drills, and so on, are held by the operator and brought to the workpiece.  Benchtop and floor-standing tools, such as table saws, drill presses, and so on, are stationary and the workpiece is held by the operator and brought to the tool.  As a rule of thumb, smaller workpieces are brought to stationary tools while portable tools are brought to larger or stationary workpieces. An advantage of stationary tools is because they usually have a table to stably orient the workpiece to the cutting edge, they provide for greater precision.

This notion applies to sanders too.  Fixed sanders are usually of the belt or disc variety, and they can range from 500+ pound behemoths driven by 350 HP Chevy V-8 engines, to small benchtop units in the ½ HP range.  The RYOBI Benchtop 6-inch disc / 4- x 36-inch belt sander (Model BD4601G) is a good example of the latter.  While combination belt/disc sanders come in all sizes and powers, this one is small enough to fit on a bench, and at about 50 pounds it’s light enough to move around or bring to a jobsite.  It fills the need for a precise sander for finish work and small pieces, both for the contractor and the homeowner. 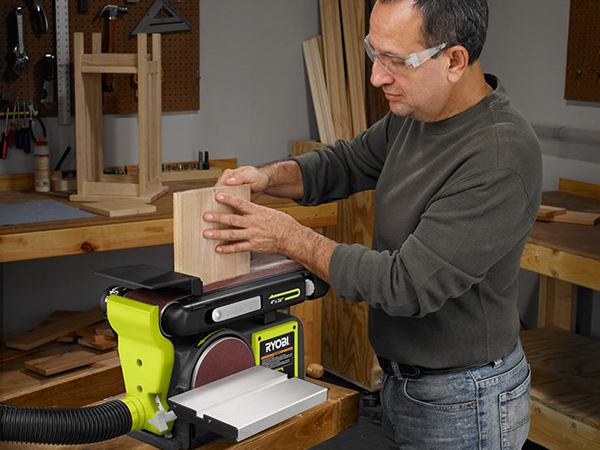 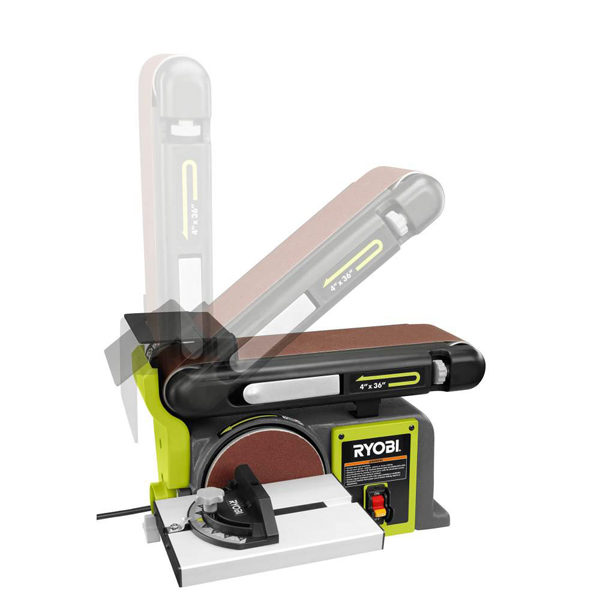 The assembly required with this combination sander is minimal and intuitive.  You’d be pretty safe doing it the “guy” way and not reading the directions, which I initially did.  But before I powered it up, I did check a couple things in the manual just to make sure I had a couple parts installed in the right orientation.  I mean, I was pretty sure I did, but the time to be really sure is before you turn the power switch to “on”.  It’s actually OK to read the directions—you can still keep your guy card!

The RYOBI Benchtop Disc/Belt Sander comes with an 80-grit belt installed, and an 80-grit adhesive-backed sandpaper disc.  You’ll want to have a variety of grits on hand of course, and Rob has a nice “sandpaper grit 101” piece here.  I did all the initial testing with the supplied 80-grit papers.  Belt and disc changes are very simple and easy for when you need other grits.

Assembly took only a few minutes (including the double-checking).  Then it was power-up time. 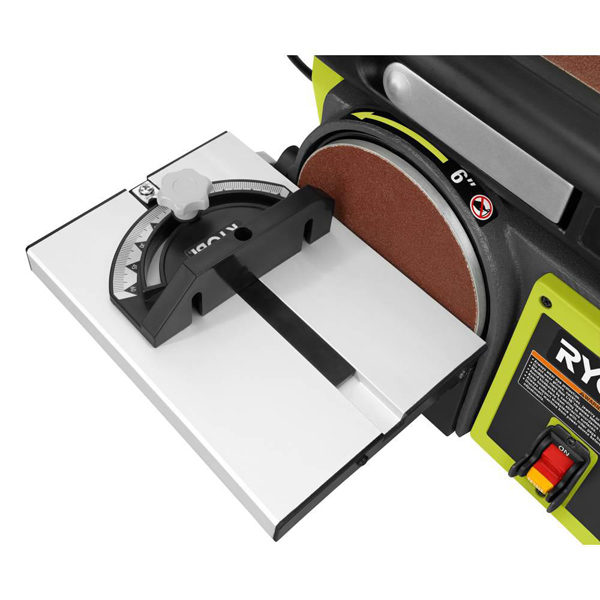 There are only a few controls on this sander, and they are intuitive and obvious to anyone familiar with a power sander.  Power switch, tracking control, belt tension release (for belt changes), table pivot knob, and belt platen pivot (this requires a hex key)—that’s pretty much it.  The sander comes up to speed quickly and once the belt is tracking-adjusted you’re set to go to work.

First though, a word about power.  This is a ½-horsepower sander.  For comparison, hand-held corded belt sanders are typically 50% to 100% more powerful.  Even though I’m probably a few pounds shy of a world record bench press, I can still easily stall most corded belt sanders if I apply enough pressure.  And by “enough” pressure I mean “way more pressure” than is reasonable or rational.  Remember when grandad told you to “let the tool” do the work?  This applies particularly to any cutting tool: from saws, to taps and dies, to files and rasps, to sanders of any sort.  A small benchtop sander like this one is meant for small workpieces; if you want to flatten 4x hardwood stock quickly, you’re using the wrong tool.  But if you need to shape some trim or cabinet sections, or you’re delving into the realm of woodworking or wood crafting, then the RYOBI Benchtop Disc/Belt Sander is a great tool for the shop or jobsite. 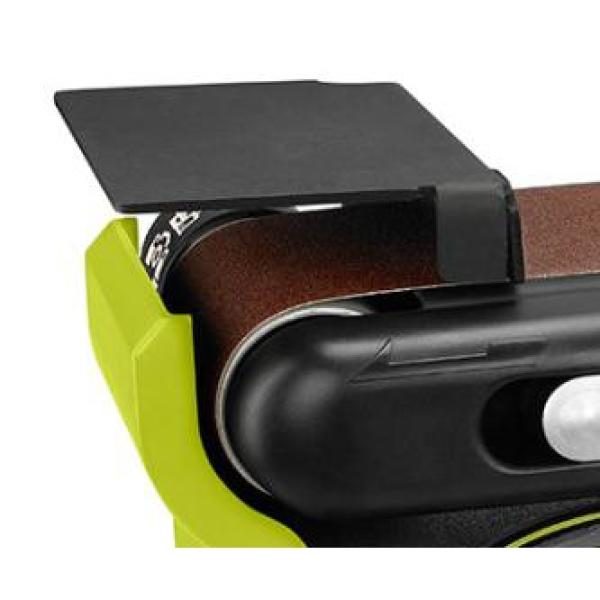 No surprises here.  The sander performed exactly as you’d expect froom 80 grit paper moving at the designated speed.  I could sand all kinds of “normal” sized soft and hard woods with ease, comfort and efficiency.  By sticking to workpieces of less than the entire sanding surface (as one should), I had no stalling or significant slowing while sanding maple, fir, pine, and PT.  The table was secure and provided a good reference; the belt tracking was stable.  The main thing you’d expect from a fixed sander like this is that you could reliably hold a work piece to the sand paper with no slowing or slippage, and the RYOBI unit performed perfectly.   The adjustments to the table and platen angle were also easy to make.

Available for $159 at The Home Depot. 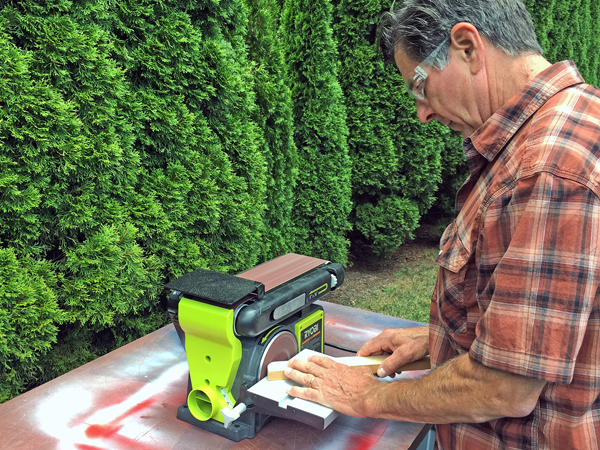 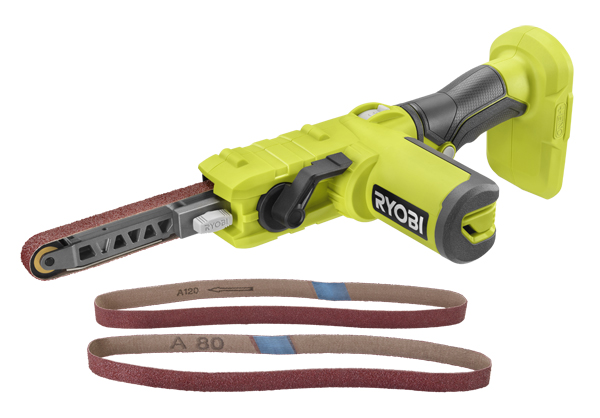 This tool (model PSD101) has been sold in Europe for a while and will be available in the U.S. in the Fall of 2020.  In Europe it was called an “electric file”, and that’s a good way to think about it.  Basically it’s a narrow powered sander for reaching into narrow spaces and for detailing (or creating) small crevices.  A simple glance at the tool will make its function and uses self-explanatory. 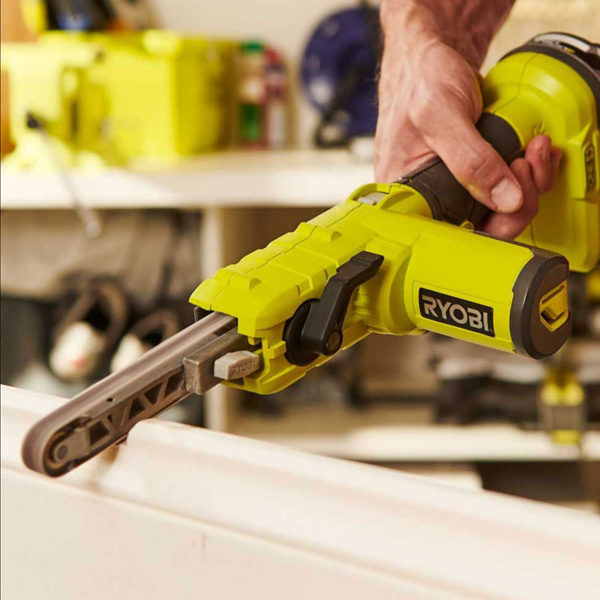 The RYOBI PSD101 is ideal for sanding and shaping in tight spaces where previously you’d have to use a file or a piece of sandpaper wrapped around a stick (or perhaps your finger).  The variable speed control allows you to optimize cutting speed for the sandpaper grit and the nature of the workpiece.  The balance of the tool with battery is, in my opinion, just about perfect, making use very ergonomic. Belt changes are trivial, tool-free, and easy to accomplish. 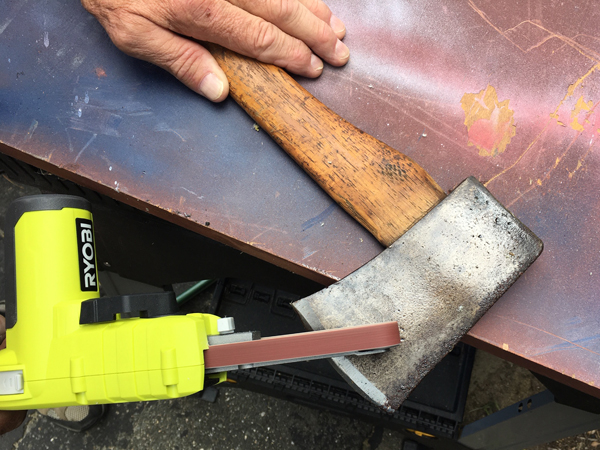 We’ve all been frustrated by sanding or filing small, irregularly-shaped, or hard-to-reach surfaces.  This tool is probably what we’ve all imagined we’d like to have for those jobs.  Again, using the PSD101 brought no surprises—-unpleasant or unexpected.  It was ergonomic and intuitive to use, with no stalling (but I didn’t apply unreasonable pressure, either).  It sanded steel, aluminum, and various wood species effectively and far more easily than any other alternative method. This is one of those tools that fills a niche like nothing else.  It allows fast material removal. when without it the removal would be slow, clumsy, and frustrating.  Once you have it you’ll find yourself reaching for it way more often than you thought you would.  Look for it at Home Depot in the Fall for $79.