The folks at DEWALT recently released the DEWALT DCL050 LED Work light that features 3 super bright LED’s with 2 Brightness Settings (500 and 250 Lumen) that work off the 20 volt battery platform.  This LED work light accepts a bottom mount 20 volt battery that allows the light to sit flat on a table. The DEWALT DCL050 LED work light weighs 1.7 pounds and measures 5.8 x 3.9 x 14.9 inches.   It’s LED work head pivots 0 to 140 degrees which allows the user to direct the work light in many different positions.   A built in, telescoping, storage hook stores in the work light head and allows the tool to hang and rotate 360-degrees on the hook, this hook is designed to fit over an 1-1/2 inch pipe.  The hook has a 3-inch clearance and from the tip of the hook and 4-inches at the arch of the hook.

The work light lens is an over-molded plastic, surrounded by rubber over mold.   Two positions on either side of the battery allow for the mounting of a belt hook accessory.

Prior to this release DEWALT offered their DCL040 with one LED bulb producing 110 lumen and a 120 degree pivot adjustment.  The DCL050 is a huge advancement to it’s predecessor.  Its brighter and allows better positioning. The DCL050 is bright and extremely useful on the job site.  I initially thought that the pivot would be weak and fail but after using and dropping it the pivot proved to be extremely durable.

While I did not use the hanging hook much the pivot position is incredibly adaptable to adjustment and shedding light in all direction on a swivel.

This is the type of tool that any pro contractor will want, especially if they are running other 20 volt battery DEWALT tools. 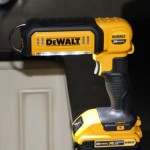 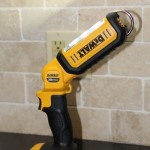 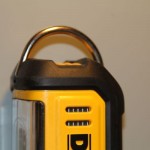 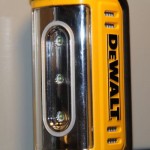 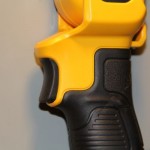 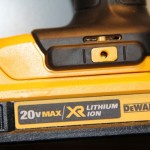 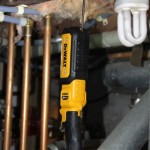 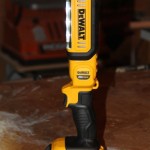 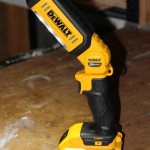