Laser levels are in the “New Fangled” tool category.  A lot of old school carpenters scoff at the use of such tools and claim that they can lay out anything with a 4’ level and a plumb bob. But the reality is that these tools are more accurate, faster and easier to use especially when doing larger layouts. The Bosch GLL 3-50 Three Line Laser with Layout Beam is great for layout of interior framing, cabinets, wall tile, drop ceilings, and even stairs. Laser levels make layout much simpler and quicker and multi-cross lasers add a whole level of versatility. But at this price point you can’t match the versatility of the Bosch GLL 3-50, the horizontal and vertically projected cross laser and a plumb point coming out of the bottom of the tool allow for a wide variety of layout and leveling options.

The Bosch GLL 3-50 also includes a pulse mode allowing it to be used outdoors or over a greater range with an optional laser receiver. The mode button changes which lasers are projected.   The on off switch has 3 positions which include:

I found that getting the on off switch into the auto leveling mode was a little stiff so it may require two hands, one to hold the laser and one to slide the switch.  But it worked fine and you definitely know when you’re auto leveling.

The included base is a very nice little accessory that has a 360 degree fine adjustment knob allowing for fine tweaking of the laser placement and the ability to do a full 360 degree room layout if need be (certainly not as quick and easy as a rotary laser but you also generally spend more and get a lot less versatility for other layouts with a rotary laser).

For simply standing up the laser the base is a vast improvement over other bases I’ve seen and used on laser levels. My only issue here is that you have no viable option for hanging the tool off of a wall or post without spending additional money on accessories. I think that a minor tweak to the price point and a kit that includes this would be really nice.

The laser lines are about ⅛” wide and the manual recommends marking from the center of the line.

I’ve seen lines that were as wide as ¼” so this is a pretty fine line to work with and if you’re consistent about where you mark you’ll have consistent results. I’ve had no problems with the width of the lines when doing what have mostly been small scale layouts. I did find that even though there isn’t a cross projected out of the bottom of the tool you can still manage square layouts with the plumb point/layout beam and the two vertical lasers. So this was a welcome discovery as so much of what I’m laying out depend on a square layout on the floor. I’ve used the Gll 3-50 laser for laying out custom cabinets, checking entry and cabinet doors for plumb and level, installing a sink base, and laying out an exterior landing.

I found the the Bosch GLL 3-50 to be intuitive and easy to use and only really needed to look at the manual once to figure out the different modes and settings.

While laying out a floor to ceiling built-in cabinet I needed to mark the plumb point on the floor and with the laser base’s legs extended there is plenty of room to line up a level and pencil to make a mark on the plumb dot.   This lack of access for marking has been a complaint I’ve heard about some competitor’s tools.

When laying out the exterior landing as long as I was in the shade I was able to make out the laser line at least over the 7’ of the landing, so even without the optional laser receiver it can be used for some limited exterior applications, weather and light conditions permitting.

I found the accuracy to be spot on when checked against my 78” level (which has never let me down). The out of level indication is simply a slow blink of the lasers which does the job just fine.  The fine-adjustment knob is really handy for placing your vertical lines in just the right place or getting the vertically projected cross to line up correctly on the ceiling. Instead of playing the “tap, nudge, darn it went too far” game you just dial it in to where you need it.

While it is versatile for it’s price point I still think that just about any layout tool that comes in at a few hundred dollars should come with a tool box that will hold the tool and included accessories. Another item I’d like to see included is an L bracket with a magnet and a hanger slot in the back. The only limitation to this laser is the lack of mounting options.

This is a really solid tool that doesn’t take up a lot of space and really simplifies many layouts. As a remodeler doing many different jobs I really appreciate the versatility of multi-cross lasers with the layout point, and the included base is a very nice accessory that really adds to the ease of use of this laser.

I brought the the Bosch GLL 3-50 to the job-site and could barely keep it around and available for my own use because the guys onsite kept on borrowing it. One of my carpenter buddies wanted to borrow it because he liked it better than his own laser! If you’re in the market for a laser level and want to get a lot of versatility for the money the Bosch GLL 3-50 is a great way to go! 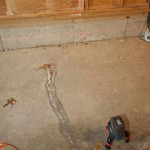 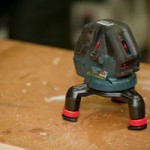 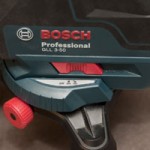 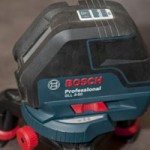 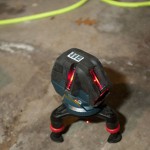