By John Peachey on Tools PLUS! 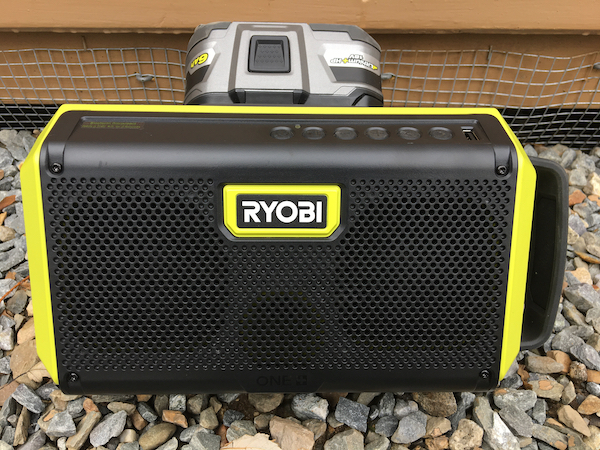 While I would not call myself an “audiophile”, I love to listen to music and I do so all the time.  I have owned numerous Bluetooth speakers to enjoy my favorite music on.  I have recently been using the Ryobi 18V One+ Speaker with Bluetooth Wireless Technology (PAD01B) and I have been very impressed with its powerful sound, long-lasting battery, and Bluetooth transmission range.

When I first unboxed the Ryobi PAD01B, I was especially impressed by its size and sturdiness.  This speaker was well-designed to be both portable and durable.  The PAD01B is a substantial 3.9 pounds in weight, 6.5 inches tall, and 10.5 inches in length.  It has a convenient and secure rubber carrying handle on the right side of the device and 4 large rubber feet on the bottom of the speaker. 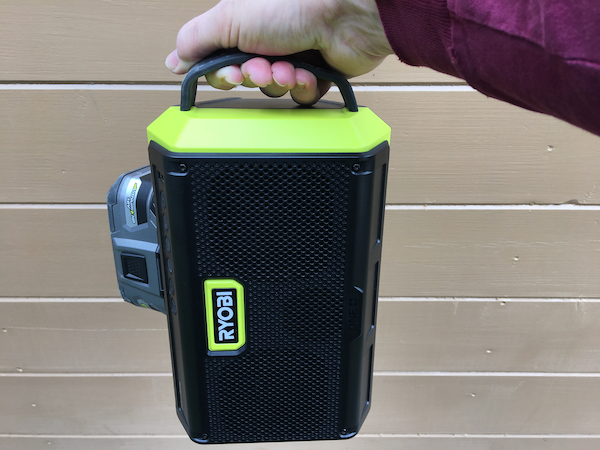 The rubber handle was large enough to be used even with gloved hands when I worked outside.  The size and shape of the speaker make it very awkward to pick up with one hand, so the handle was a welcome addition.  The rubber feet on the bottom of the speaker elevated it slightly off the ground and the feet kept it steady even at loud volumes when I placed it on smooth surfaces.

The speaker is angled in the front so that the music is directed up and away from the speaker.  I think this angled design contributes to its ability to fill a space with booming sound.  Importantly, a battery and charger are not included with the Ryobi PAD01B, so be prepared to provide your own.

When a battery is installed, it gives you another place to pick up the speaker, and even better, it gives you a spot to place your device when it’s playing music.  The PAD01B does not have a water resistance rating, so it should not be used near water or in inclement weather. 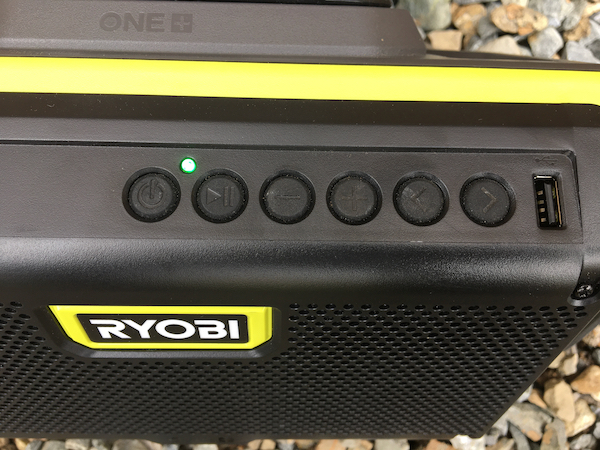 The Ryobi 18V One+ Speaker works exclusively over Bluetooth.  There is no auxiliary input jack available to connect a device, which is too bad since that would have been an added convenience.  The PAD01B has 6 clearly labeled on-board control buttons on the top of the speaker—power, play/pause, volume up, volume down, next track, and previous track.  When you turn on the speaker, it will give an audible “power on” announcement and the green LED illuminates.  There is also an audible “power off” announcement when you turn it off.

The speaker identifies itself as “Ryobi PAD01” in a list of available Bluetooth devices and it will immediately try to pair with a Bluetooth-enabled device.  I had instant success pairing the speaker with each Bluetooth device that I tried.  The PAD01B can only pair with one Bluetooth device at a time and at startup it will always pair with the last device that it was paired with.  To disconnect from the paired device, you have to hold the play/pause button for 3 seconds, which then provides the “Bluetooth disconnected” audible alert.

When the PAD01B is not connected to a device, the green LED blinks.  I never once had my Bluetooth device drop its connection from PAD01B.  Ryobi advertises that it has a 125-foot Bluetooth range and I found it easily maintained its connection from at least 90 feet away.  Past 90 feet, the music did start to become choppy.  Working inside my yard, I was able to move around the entire space and the music played seamlessly the entire time.  I was very impressed!

Once my iPhone had iTunes open and it was connected to the PAD01B, the controls atop the speaker could be used to control the music.  The play/pause button would start and stop the music each time I used it without fail.  The volume up and volume down buttons both controlled the volume level of the music and each adjustment made a considerable difference in the volume level.  Finally, the next track and previous track buttons did exactly what they promised when listening to a playlist on iTunes.  The controls all functioned perfectly and my only suggestion for improvement would be to add some back-lighting since the buttons are black and they are difficult to see in dimly lit situations. 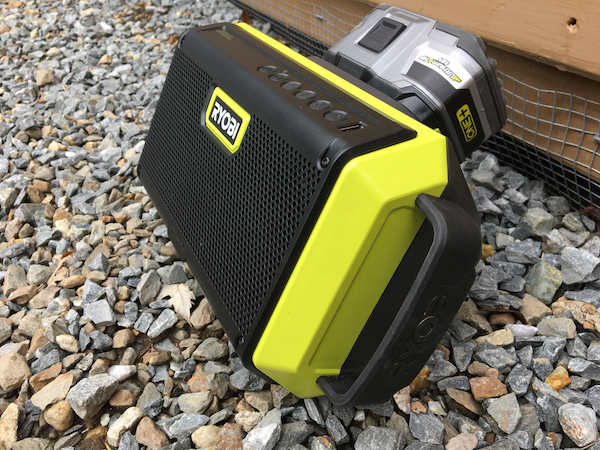 For all of my testing, I used the 6Ah Lithium+ HP 18V ONE+ battery.  Over the course of 3 weeks, I used the PAD01B speaker for more than 30 total hours.  Even after 30+ hours of usage, the P193 battery has 25-50% left of battery power (according to the battery level indicator).  Ryobi advertises more than 10 hours of usage with the 4Ah P192 battery.  I was very impressed that the large capacity 6Ah Lithium+ HP 18V battery still had more than 25% of its battery life available after streaming so many hours of music.

Ryobi included the added bonus of a USB 2.1 Amp charging port atop the PAD01B speaker.  The PAD01B must be powered on for the USB charging port to operate and charge your device.  I found that when my iPhone was not streaming music, the battery of the iPhone could increase by just over 20% in 30 minutes when connected to the charging port.  Having the ability to simultaneously stream music and charge my Bluetooth enabled device via the included USB 2.1 Amp port made the Ryobi PAD01B speaker even more appealing to me.  Ryobi chose to not give the PAD01B speaker a hybrid power source (electricity) like many of their other recent tools, but with battery life like this, it really isn’t necessary. 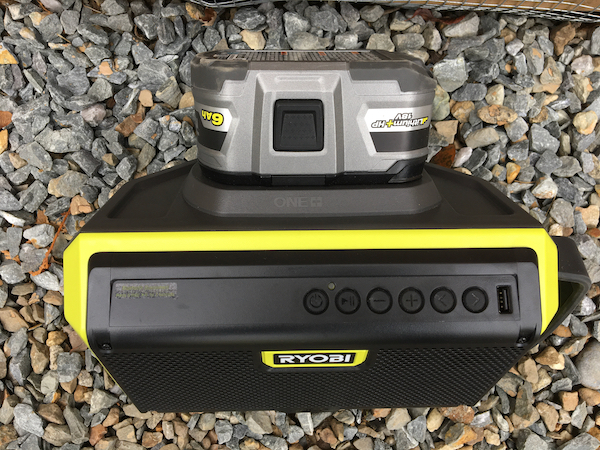 For music sources, I used several music playlists stored on my iPhone and iPad.  I also listened to music from Pandora and Apple Music.  Each of the sources worked without any complications.  Ryobi advertises the 18V One+ Speaker with Bluetooth Wireless TechnologySpeaker has Smart Amplifier Technology for dynamic highs and lows.  It is equipped with dual 3-inch 15-watt speakers and Ryobi states it has 8.5x improved clarity compared to their 18V ONE+ Hybrid Stereo (P746).

The PAD01B is incredibly loud as the dual 3-inch speakers are packed with power.  The entire speaker vibrates as it pumps out the music.  Outdoors, it could easily be heard from 100+ feet away at just half volume on my iPhone.  There was only minor distortion at the loudest volumes.  When it was used inside the house, it filled all 3 floors of the house with sound.  I really enjoyed listening to my music through PAD01B.

While PAD01B has tremendous power, the music itself was not as clean when compared to more expensive Bluetooth speakers made by leading music companies.  The music was pleasing to the ear, but the vocals and highs were not always crisp and the bass could have been more.  If, however, you will be using the Ryobi PAD01B most often in your workshop or outdoors while working or entertaining, you will be very happy with the resounding music that it reproduces over Bluetooth.

When music was playing over PAD01B, the music was not interrupted by alerts when I received a text or email.  I liked that a lot since I don’t like it when my music through a Bluetooth speaker is disrupted by the audible alert of a text message.  When I received a phone call on my iPhone, the music immediately stopped by itself and it remained off until the phone call was done, whereupon the music resumed at the exact point it was paused at.  That’s a convenient feature to have on the speaker. 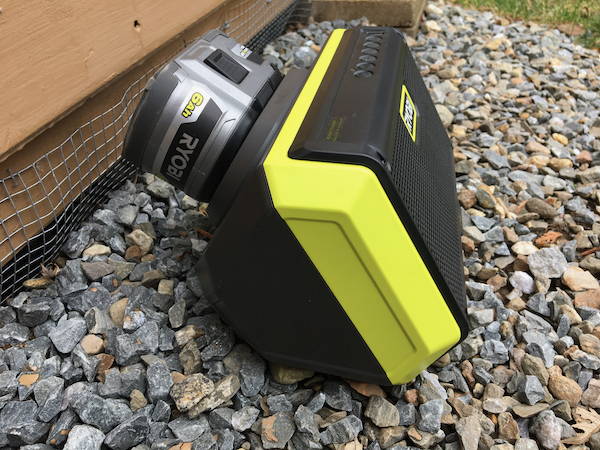 The Ryobi 18V One+ Speaker does not have a built-in radio like its predecessor, the Ryobi P746.  I do not see the lack of radio as a shortcoming, however.  As a Bluetooth speaker, PAD01B has access to radio stations through Apps installed on the Bluetooth device.  I used the TuneIn App on several occasions to listen to local Boston-area radio stations.  In each case, the radio station was clear and experienced no connection issues.

I used the App from 105.7 WROR in Boston and was again very pleased with how it worked over Bluetooth.  So, for those users that might lament the loss of a built-in radio tuner, I would remind them that they could instead take advantage of radio Apps on the PAD01B Bluetooth speaker. 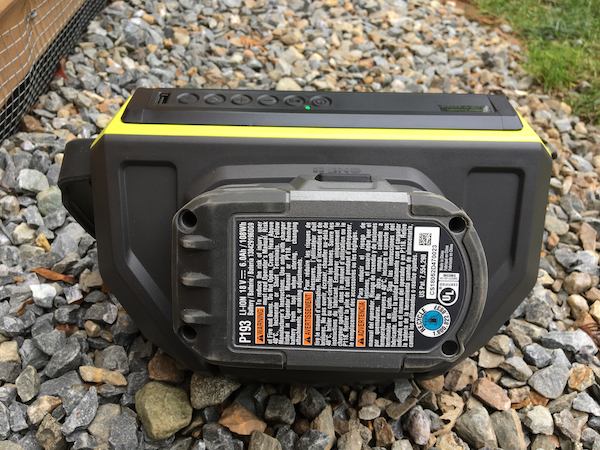 I am a loyal Ryobi tool owner and I enjoy each of the products powered by their versatile 18V ONE+ batteries.  I am very pleased to now own the PAD01B.  It has unbelievably long-lasting battery life.  The Bluetooth range is extensive and it never dropped my connection within 90 feet of the speaker.

Most importantly, it has enough power to fill your property with music while you entertain or work on your house.  Such The Ryobi PAD01B should keep the music playing and the good times rolling at your home for an entire weekend.

You can purchase the Ryobi 18V One+ Speaker at Home Depot for $79.00.  Remember that you will need to provide your own 18V ONE+ battery and charger to operate it.  The PAD01B speaker comes with a 3-year limited warranty.