I’m a big fan of tools made in the US. The Powerstrike hammer is a truly unique hammer made by a company that also makes frames for high end mountain bikes. If you know anything about mountain bikes then you know that there is a pretty short list of desirable features:

These are all great features to have in a hammer too. With an aluminum monocoque (one piece) handle, stainless steel head, and a thread-on steel face. The parts are replaceable and most importantly the hammer works amazingly well.

Powerstrike was kind enough to send us a few of these hammers so the whole ACC crew could get their hands on them.

The  Powerstrike Hammers are beautiful in design and craftsmanship. First off the Powerstrike hammer is very light. The aluminum handle comes in a variety of colors and is gracefully formed and while the grip isn’t tacky it stays in your hand easily due to the shape of the handle.  The hammer head is welded from stainless steel and bolted to the handle with an Allen bolt. The head weight can be modified from 14-24 ounces.

The balance and feel of this hammer in the hand is nearly perfect–it just fits. It’s a joy to hold and swing. It seems a little silly to go on like this, but seriously, this thing just feels awesome. This hammer is all top-notch US craftsmanship and design.

I decided that the best way to test this hammer out was to compare it to some other hammers in my arsenal.  I compared the following hammers:

I started out putting some 8d nails into LVL that we had leftover from our cordless circular saw test. The other thing I noticed about the Powerstrike is that it seems to return some of your energy on the return swing. It doesn’t rebound, or bounce back, but there is a subtle but noticeable force that seems like it is pushing the nail a little more and making the hammer just a little easier to get back into swinging position. In other words, despite the distinct lack of vibration, the hammer doesn’t feel dead when striking.

The grip is made with a very lightly textured paint that gives just enough grip but doesn’t get hung up on my hammer loop when I’m putting it back in my tool belt. When the grip gets wet it gets a bit slippery. Personally I wear gloves most of the time so it’s not much of an issue for me. Some of the guys on the crew would have preferred more texture on the handle to help improve grip when things get sweaty.

The handle on the Powerstrike is long. While this does assist in the performance of the swing, some of the guys on the crew found that the long handle got in the way while in their tool belts.

The magnetic nail starter works well. I think a longer channel to hold the nail in straighter alignment would be an improvement, but it works fine for starting a nail into harder to reach places albeit with some finagling if the nail doesn’t get started as straight as needed.

One of my favorite features of this hammer are the dual nail pullers on either side of the hammer head. The guys on the crew were also fans of this feature. They drastically improve leverage versus the rip claws and are incredibly functional. I’m reaching for my flat bar much less often on the job-site now.

I’ve been using the Powerstrike for a few months now and it has quickly become my favorite hammer for framing and demo. I’d love to see a slightly smaller version that could be used for trim work as I find that the size of this hammer makes it unwieldy for that kind of work and the sharp claws which are great for framing and demo are too likely to accidentally mar trim. A more “grippy” finish and or more texture on the handle would help avoid slips on hot, sweaty days. The length is an issues for some users, so maybe a smaller version specifically for trim work would be a good option.

This is a really amazing piece of engineering.  At $149.00, these hammers  come in at a premium price, but the price of the Powerstrike is on par with other high-end hammers out there.

I’ve had the opportunity to use this hammer for a few months now and it has become my go-to for most of what I do and one of the best framing hammers I’ve laid my hands on. So if you’re tired of beating yourself up while banging nails, do yourself a favor and pick up a Powerstrike hammer. You’ll be glad you did. 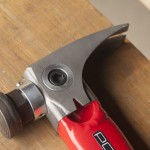 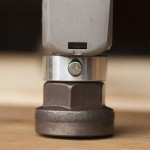 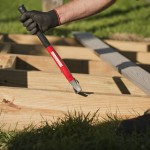 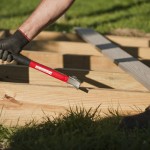 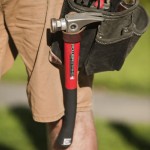 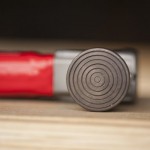 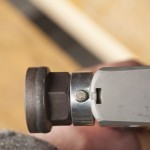 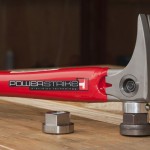