The DeWalt 60-inch form lifter (model DWHT55051) is DeWalt’s version of the classic Burke Bar.  The Burke Bar was introduced in the 1940s as primarily a concrete-working tool, useful for levering forms into place, and breaking apart forms and their associated stakes and wires, and generally just moving and prying apart rough workpieces.  While concrete contractors have always had one — or a few in — their trucks, this niche and almost forgotten tool has, over the last couple of years, been made more widely known by Scott Wadsworth over at The Essential Craftsman.  There are now several sizes of the Burke Bar on the market, and this DeWalt entry is pretty much the original size and weight.

Why you need one

At 20 pounds and five feet long, this is not a delicate tool.  It’s obviously useful for bashing things, and its curved profile makes it useful for prying things apart.  As a first-class lever with a 9:1 mechanical advantage, it’s also extremely useful for lifting and shifting heavy objects into place.  Examples might be concrete forms, framed walls, heavy equipment, and even small structures.

How much is a 9:1 mechanical advantage in terms of potential force?  Back of the envelope figuring here: assuming most construction workers could do a simple body-weight dip at the gym, and assuming that that same guy might weigh 180 pounds, then this bar can apply 180 x 9 = 1620 pounds of pressure at the claw end.  That’s more than three-quarters of a ton.  In practice it might be more or less, but still it’s a hefty amount of lifting potential!

But I have a straight (pinch) bar already!

Yes, but a pinch bar is straight – to use it to lift a heavy object you have to find something to use as a fulcrum.  Maybe you’ve used a pile of scrap lumber, or a concrete black… or whatever.  The problem here — and we’ve all been frustrated by it — is that as we press down on the handle of the straight bar it often applies force to the makeshift fulcrum such that it moves it away from the load, and the fulcrum thus slides out from under the bar.  That can’t happen with this form lifter, with its bend that acts as an integral fulcrum.

Also, the DeWalt 60-inch form lifter’s claw is reasonably tapered so it can be driven between two objects.  A pinch bar and this form lifter are really two different tools for two different jobs. 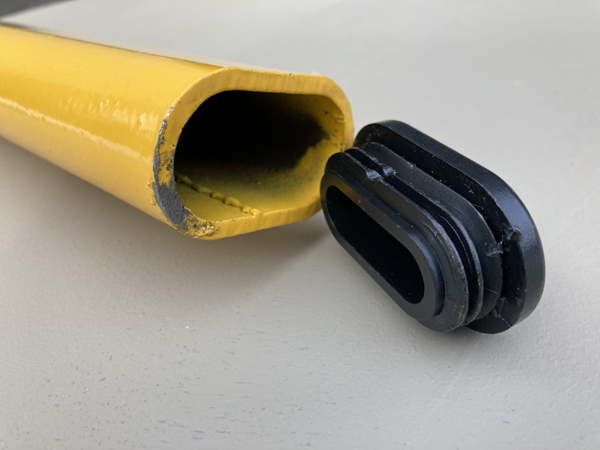 The DeWalt 60-inch form lifter has a waterproof cap at the end, but the handle is hollow.  If you remove that cap you can use this tool as a cheater bar or re-bar bender, and many people just leave it off.  Of course the claw is shaped like, well…a claw, so it can be used — with tremendous leverage — to pry up nails, spikes, screws, bolts, and other assorted things that just need to be gone.

I don’t do much concrete work; even so this is a tool that I’ve often needed over the years.  From sweet-talking heavy machines into place, to lifting decks and nudging beams along…the list could go on. And the thing is that when I needed one, it made all the difference.  When all I had available was a pinch bar, the job either got done with much frustration (and not a little injury) or I had to wait for help.  Even if you don’t work in concrete where a bar like this is a must, you’ll be so very glad it was handy.

At 20 pounds this tool can’t be manipulated all day long like a screwdriver or other small hand tool.  But recall that its heft is part of its function, in that it adds to the bashing utility of the form lifter…and getting things decoupled, broken apart and/or separated is a good part of what this tool is all about.  Also, it simply could not be as strong a lever if it had a lighter weight construction.

The photograph shows me (165 pounds) lifting the corner of a storage shed.  Even with the weight of the shed and the machinery and tools in it, that corner went right up.  Not even hard.    There’s a reason that this tool is a time-tested classic, and now you can get one anywhere that you get your DeWalt tools. 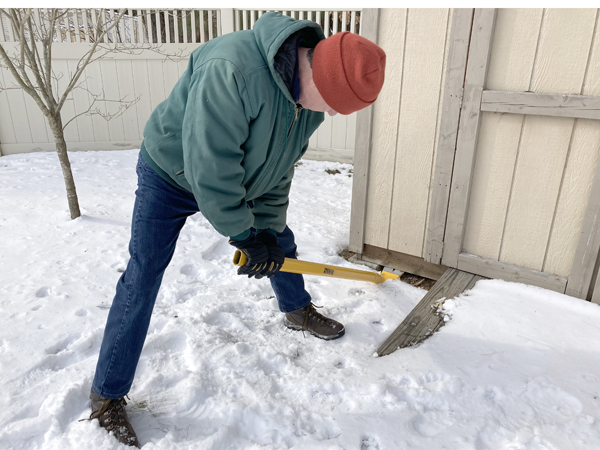 Every contracting shop needs one of these.  The DeWalt 60-inch form lifter takes up almost no room in the bed of a truck, and when you need it you’ll really, really be glad you had it.  The person or crew using it will be glad too— it will save them work and often much bending up and down with their back under stress.  I’ve added it and the Stanley Fubar that I reviewed (and really liked) to my armory of pry bars, and they both make my job easier.  Both have been added to my hand-me-down Stanley crowbar (DeWalt’s version here) — another time-tested classic, as go-to favorites.