Technology is helping people perform their jobs more efficiently in many industries. Including building and remodeling. The DeWALT 165′ Laser Distance Measure is no exception.

A solid little electronic device with a lot of rubber over-mold and is well sealed against dust and water (turns out it is IP65 water and debris resistance rated). A few buttons on the front of the device and a nice easy to read back-lit display.

Getting straight line measurements is incredibly simple and this tool is especially helpful when you’re working by yourself. Using the laser distance measure is much easier than trying to get that standout on your tape measure to go just… a little… further…

I used the DeWALT 165′ Laser Distance Measure for measuring battens on a siding job. They were just about 12’ long and I was able to simply hold the bottom of the tool flush with the siding boards that were already up and bounce the laser off the sofit. No ladder, no helper, just quick and easy measurements.

I wrote them all down so I had a cut list but if I only have five to do I could have just used the on-board memory. I also used it to measure between posts for safety rails on a deck building job. I could have done this with a tape but again it was much easier with the laser distance measure.

The specifications state that the DeWalt DWO3050 is accurate to within 1/16”. In use I found that it was spot on within 1/16” consistently allowing me to measure for handrails, framing, and siding with plenty of accuracy.

What I Used The Most!

The features I found myself using the most are the basic measurement function and the memory recall. But there are quite a few useful functions on this tool.   Such as I’d love an inclinometer but this is just not a feature you find at this price point. You’d need to spend a lot more to get that feature. The lack of inclinometer means that for accurate measurements you need to be sure that you’re not measuring at a diagonal. This is not necessarily easy to eyeball with a small device like this. This is especially true when taking indirect measurements with the Pythagorean Theorem function.

But the sides of the tool are nice and flat so it’s easy enough to hold your torpedo level up to the side of it and make sure you’re getting the level or plumb measurement you need.

I also found that some regularly used functions took a few steps to access (like the memory). I think if you use this tool regularly it should get to be second nature but I’d prefer a tool that has a more intuitive interface, especially for accessing the memory function. The handy quick reference fits into a pocket in the belt pouch and gives you an easy read guide to most of the tools functions.

This is a hard Laser Distance Measure to beat for the price and it has already found a permanent place in my tool-belt.

The DeWALT 165′ Laser Distance Measure makes what used to be awkward measurements or definite two man layout jobs easy to do by yourself. The auto area and volume functions make estimates much quicker and easier. This tool will pay for itself within a few weeks of use given the time and frustration savings. 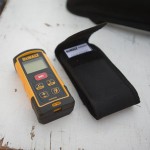 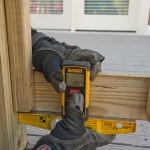