I often say that as the son of an electrician I literally grew up with a screwdriver in my hand. But it’s more true to say that I literally grew up with three tools in my hands: a screwdriver, a pair of linesman’s pliers, and a pair of tongue-and-groove slip-joint pliers (sometimes called “pump pliers”). These are the three main hand tools that all electricians use. When I was working for an electrical contractor summers and weekends in school, the guys (it was all guys back then) had different preferences for their screwdrivers and linesmans, but they all used the same brand of tongue-and-groove slip-joint pliers: CHANNELLOCK. They were so popular that the brand name became synonymous with the plier type, much as Kleenex has become synonymous with facial tissue. And still today, the distinctive bright blue handles of a pair of CHANNELLOCK-brand “channellocks” can be seen in most electricians’ tool pouches. (The blue color of Channellock pliers is even trademarked!)

It’s not just electricians. “Channellocks” are a primary hand tool in every trade I can think of: all the construction trades, every the automotive trade, and so on. Every homeowner and DIYer has a pair too, and uses them regularly. CHANNELLOCK became closely associated with this style of plier because they invented it back in 1933. “Channellocks” are such a critical tool, for which there are often no good substitutes, that I really don’t know how pre-1933 tradesmen got along without them. The original design has endured, with only minor changes to date except for the push-button adjustment feature which is what I’m looking at here.

As necessary as a pair of “channellocks” are, they sometimes require a bit of jiggling-type manipulation to get them set to the right jaw opening, and occasionally the tongue will jump its groove when you’re changing jaw size. That’s always just been part of using them, and it’s a minor issue — usually. But when you’re in very tight spaces: under a sink, in a crawl space, between the engine and the generator – that minor issue becomes a little aggravating. That’s where the CHANNELLOCK SPEEDGRIP push-button adjustable pliers shine…and in all cases this new feature makes these “channellocks” easier to use.

With the classic design, you used two hands to independently manipulate each handle, jiggling each into place, and hoping that you selected the correct tongue/groove combination for your problem…and then repeating as necessary. With the SPEEDGRIP pliers you still need two hands, but one now simply holds the upper jaw handle while the other pinches the adjusting nut as you slide the lower jaw snug against whatever you’re turning. It’s much easier and faster! 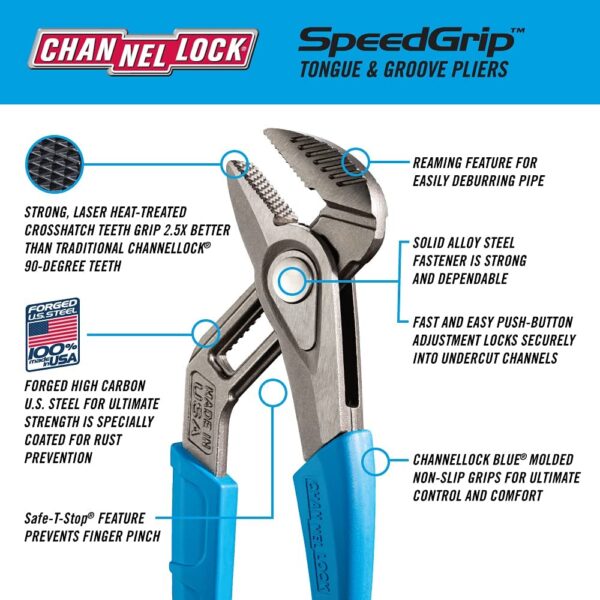 The CHANNELLOCK Straight Jaw SPEEDGRIP pliers perform pretty much as we’ve come to expect “channellocks” to, except that they do really grip better — extremely well in fact. Those re-designed cross-hatched teeth really bite, and the difference is noticeable. The push-button adjustment is in fact a real improvement over the old, original method. It’s faster, easier, and way more practical in confined spaces, and you get it right the first time. 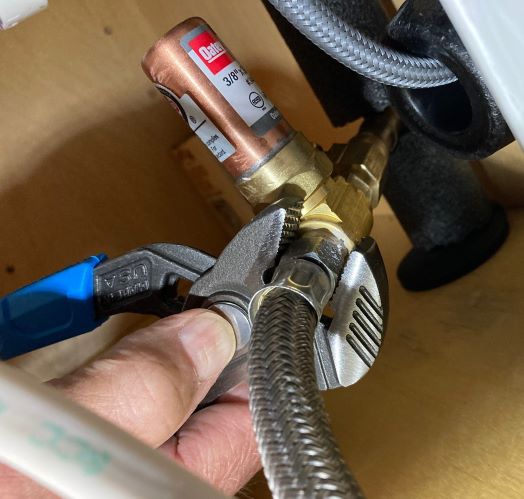 I didn’t find anything to criticize in them, but I did note two small things. The adjustment is a little rougher than I expect it to be after the grooves get broken in. I sprayed them with a dry lubricant, but they could still stand a little breaking in to let the advantages of the push-button adjustment really shine even more than it already does. Also, I didn’t notice any real advantage to the new molded grips. I didn’t notice any disadvantage either; maybe I’m just so used to the older original style after using them for decades that that’s what I expected to feel. In any case, no complaints there.

My bottom line: I’m swapping out the “channelocks” that I’ve been using for the last few years for these CHANNELLOCK Straight Jaw SPEEDGRIP pliers.

CHANNELLOCK NUTBUSTER parrot nose pliers are one of those tools that you don’t need too often, but when you do, boy are you glad you have them. Indeed, they solve a problem that we all very predictably run into from time to time. They eliminate a lot of swearing, wasted time, frustration, and bunged-up knuckles.

We’ve all had a nut too rounded to get a wrench bite on, a fitting too corroded to turn, or some other variety of stuck thing that just needs to be got off, now! Regular straight jaw pliers don’t bite enough, wrenches are no use…sound familiar? Also, we all occasionally run into a piece of round stock that needs to be rotated, but it just won’t budge using pump-style pliers.

CHANNELLOCK NUTBUSTERs solve a good deal of those problems. With aggressive, self-gripping teeth, they grab and bite like few other tools. In fact, you only really need to apply pressure to the top handle (the one that operates the non-parrot jaw) for them to bite and move things. Pretty much if these won’t get a recalcitrant nut or fitting loose, you’re going to have to either cut it off or go to a torch. Yes, you might be able to solve the problem with a Stillson-style pipe wrench, but those are big and tough to work with in enclosed spaces, and too heavy to carry in a tool pouch. 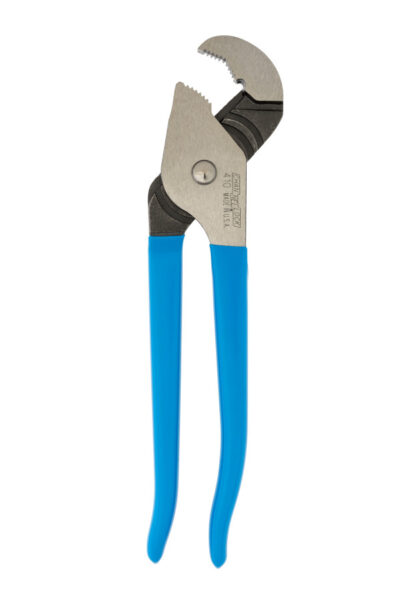 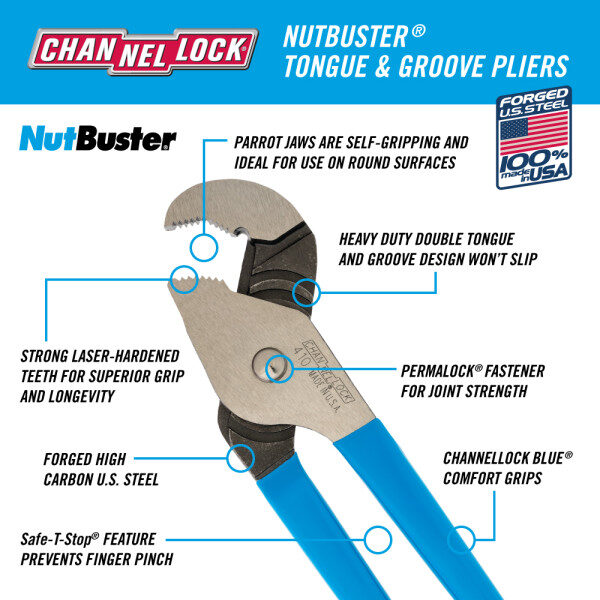 Everything about these NUTBUSTER pliers and how they operate is apparent by simply looking at them. But do they work? All the reviews on-line sing their praises, so clearly a lot of people think they do.

To see if the CHANNELLOCK NUTBUSTER parrot nose pliers would turn a nut that their pump-plier counterparts wouldn’t I set up a little controlled experiment. I used a large Stillson wrench to tighten a 3/8-20 hardened (grade 8) nut onto a hardened bolt with an oversize softer nut in between. It was so tight that the 10-inch SpeedGrip pliers just rounded the nut’s edges in trying to loosen it. But the 9.5-inch NUTBUSTER plier grabbed onto the nut and allowed me to loosen it with ease (see picture below). 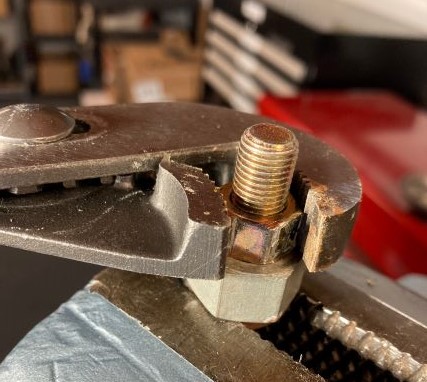 Don’t assume that you reach for NUTBUSTER pliers only when your efforts with a wrench or flat-faced pliers fail. It makes sense to reach for them to avoid rounding off a nut’s edges to begin with (after which even an impact wrench would be useless, assuming you even had space to get one on the nut). There’s no reason not to grab them when you know you have a tough nut (pun intended) to crack or pipe to turn, whether or not you’ve first tried a more traditional tool. They aren’t miracle workers (you’ll need that torch or saw sometimes) but they are there to make your life easier. 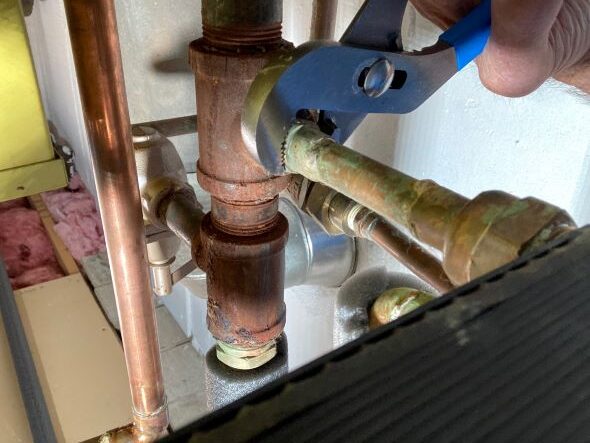 The bottom line on the CHANNELLOCK NUTBUSTER parrot nose pliers for me: they are keepers, and will go into my “specialty pliers” drawer. I may not need them as often as, say, an auto mechanic, but when I do they will be a Godsend!  No matter your trades type, you’ll undoubtedly find them valuable too.

CHANNELLOCK Tools Made In The USA