By Robert Robillard on Tools PLUS!

Every tradesperson regularly runs into the problem of a screw drive stripping out, and now the screw can’t either be screwed in or backed out.  This is usually an issue with old screws or the cheap screws that come with so many products these days.  Of course, it’s usually a Phillips drive that strips out.  (This isn’t surprising if you remember that Phillips screws were actually designed to cam out since they were designed for the aircraft industry and the cam-out was meant to restrict over tightening in the aluminum airplane bodies. 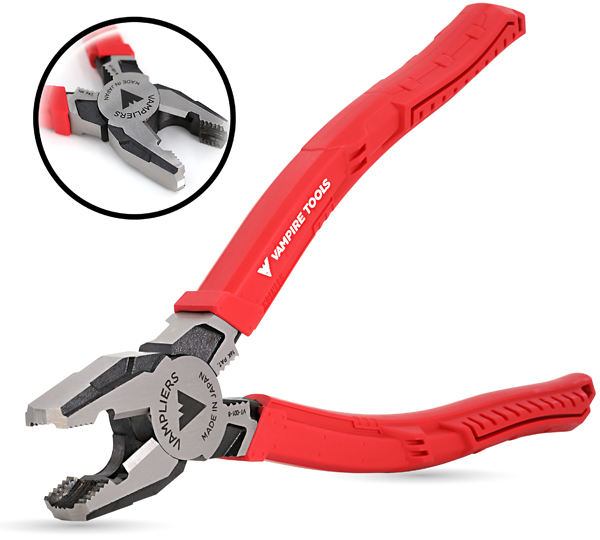 About the only good thing to say about Phillips screws is that they are worlds better than the old slot head screws.)  While I usually try and use my own screws or bolts when installing a product, sometimes that’s not practical and you just have to go with el cheapo ones that come in the package.

And of course, I am always running into the stripped drive problem. 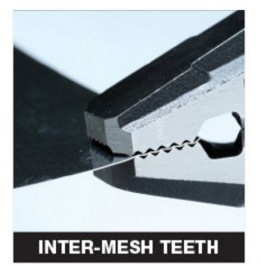 While there are several products available and methods used to back out these damaged screws, what we all do, at least at first, is simply reach for a pair of pliers and hope that they will get a good enough grip on the screw head that we can remove it.  Sometimes that works…many times it doesn’t, and we have to resort to Plan B.  Plan B usually involves a trip to the truck to get a drill and a specialty tool.  This is always time consuming, and always a pain in the tuchus—more so if we’re up in an attic, in a crawl space, or a half-mile from the truck.  There’s never a teenage boy around when you need one.

Most of us always have a pair of pliers in our pouch or toolbox; if only those worked better. 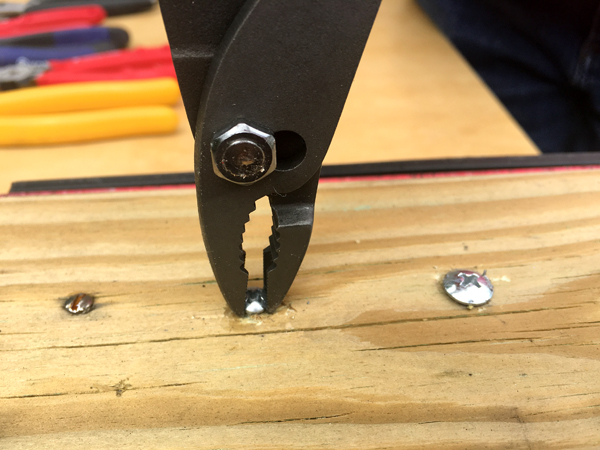 Vampliers pliers were designed for just this job—for grabbing ahold of troublesome screw heads and providing the traction to allow them to be backed out.  The various models in the Vampliers line have multi-directional and interlocking teeth specifically designed to latch onto things like screw heads, thin sheets, and so on, and give you the purchase to move them.

These pliers are made in Japan and are of obvious high quality.  The parts fitting is precise, the design robust, and the handles comfortable.  They are useful not just for screws with stripped drives, but for removing screws for which you might not have the right driver —such as tamper-proof screws, and for grabbing onto rusted screw heads.  So long as there’s a minimal “lip” available to grab onto, the Vampliers really do latch onto screw heads much better than their “normal” counterparts.

I received three pairs of Vampliers to evaluate: a pair of 8-inch linesmen (model VT-001-8), a 7-inch set of slip-joint pliers (model VT-001-7SJ), and a new 6.25-inch model called the “Brute” (model VT-002-6) which kinda resembles a mini version of linesmen. Each has a set of longitudinal and lateral teeth on the business end, and the different sizes are useful for different kinds of situations. 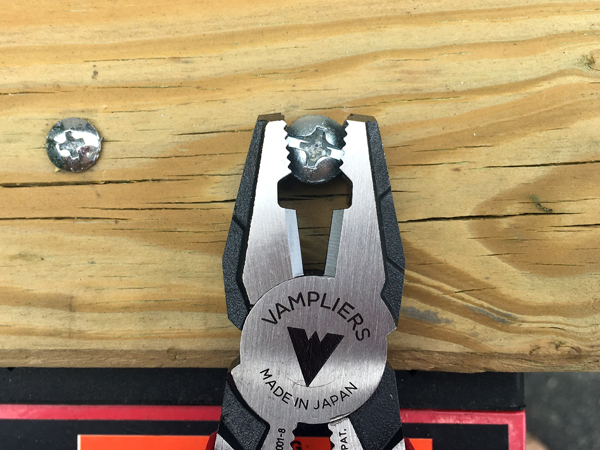 I set up a test block by screwing different sizes of screws—from smaller than a 6/32 to a large sheet metal screw—into a well-weathered pressure treated 4×4.  Each was in tight, and my “normal” pliers—a regular set of linesmen, a good pair of regular slip-joints, and a pair of needle-nose pliers—didn’t budge them.  Each of these regular pliers simply slipped around the head.  But the appropriate sized Vampliers, in each case, did grab onto the screw’s head and I could back them out.  That was pretty convincing. 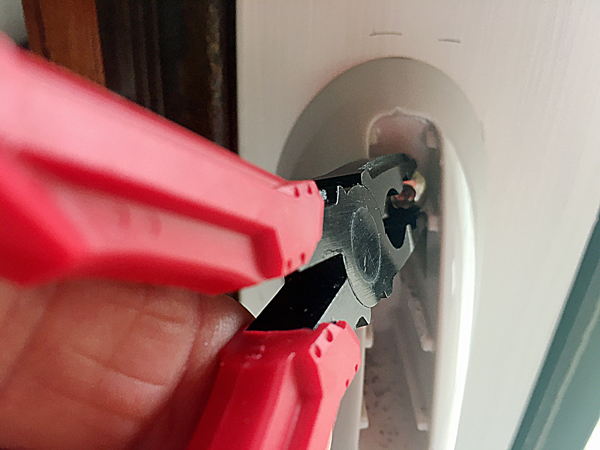 As it turns out, the day after the Vampliers arrived I had a situation that required them.  I was installing grab bars in an elderly household, and sure enough, one of the cheap screws that came with the bar stripped its head before it was fully seated.  This screw was in a recessed channel, so there was no chance of getting anything but a pair of needle-nose pliers on the head, and of course they didn’t do the job.  The Vampliers Brute though was able to get into the narrow space and extract the screw, one-tenth of a turn at a time.  I was sure glad that I happened to throw the Vampliers into my toolbox that day.

It’s safe to say that the various Vampliers models perform as advertised, and are way better for screw extraction than the regular pliers you’d otherwise reach for. 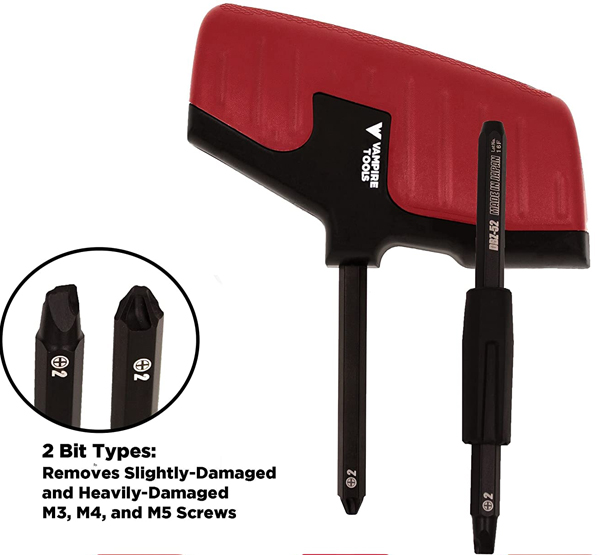 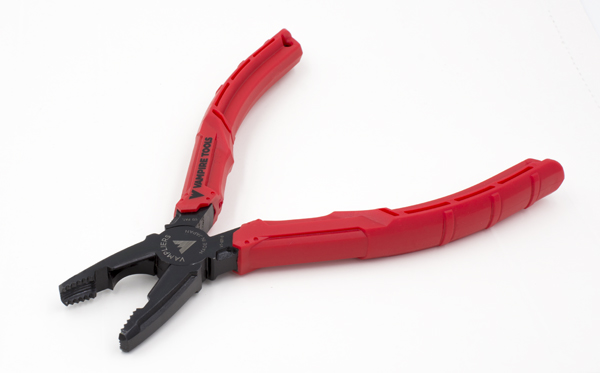 I suppose that I’m like most of you in that I have a toolbox that always contains tools that I’m likely to need; it gets augmented daily with any other tools I need for that day’s jobs.  Among those standard tools that are always on a site with me are a pair of slip-joint pliers and a pair of linesmen.  I’m replacing those two units with their Vampliers equivalent;   Vampliers run in the $30ish to $40ish range per unit.

It’s not too often that a tool comes along that doesn’t just do a job better or more efficiently, but actually solves a common problem.  I’d put Vampliers in that category. 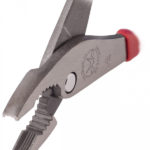 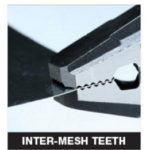 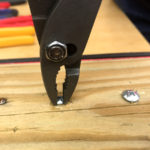 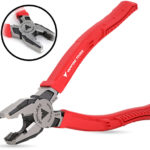 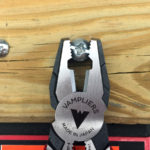 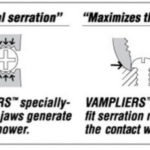 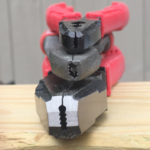 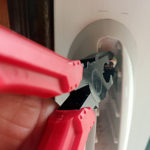 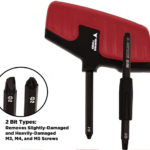 How To Remove A Spinning Screw