The Skil name is synonymous with circular saws. To the point where many carpenters (especially the more experienced ones) refer to all circular saws as “Skilsaws.”  The Skil worm drive saw is legendary in the carpentry world, among framers. it’s known for being one of the most dependable, durable, and powerful saws available.

The Skilsaw design has been refined a lot in the 75+ years since it was introduced. One of the common challenges faced by carpenters, primarily framers and deck builders, is how to deal with cutting down larger dimensional lumber and site-built beams quickly and cleanly.  Skil has a solution that doesn’t involve making more than one cut or [making] sketchy maneuvers with large scale lumber on a chop saw: the Skilsaw Sawsquatch 10-1/4″ Worm Drive Saw SPT 70 WM-22 . This is a BEAST of a saw.  At about 16-½ lbs and over two feet long, this is not a saw that you want to be dragging up a ladder unless you really need to (and it does have a rafter hook just in case). But that beastly size makes a lot of sense given the massive 10-¼” blade. Unlike many stock blades the Sawsquatch comes with a Diablo general-purpose blade, which is a far better blade than the vast majority of stock blades you’ll get especially with a framing saw.

There are helpful marks on the depth gauge for proper depth for your most common cutting tasks. ¾”, 1x, and 2x stock. The large detachable (and reversible) auxiliary handle makes for a reassuring grip on the front of the saw. And the magnesium base plate helps keep the weight down and makes for a nice low-friction surface while cutting. Part of the base plate has a slot for on-board wrench storage, a very handy feature.

Did I mention this thing is big? The Sawsquatch makes other circular saws look like kid’s toys.

I had to cut a chunk off of a PT beam for a deck project which had been outside in the rain and cold of New England in early winter–it was soaked through and frozen. The beam is a sandwich of two pieces of 2x PT and one layer of ½” PT ply. Now this was my first cut with this saw so I was taking it slow and safe but even then the cut went faster than I expected and other than the heft of the saw, cutting was nearly effortless.

On the second cut I decided to get a little more aggressive.  I pushed the saw a bit harder which resulted in a little more noise, slightly more vibration, but it resulted in a beautiful clean cut in even less time.  A frozen PT 4×4 sign post was also no match for the Sawsquatch. OK, since frozen PT was no problem, I decided to try a couple pieces of LVL sandwiched together. Again, a surprisingly easy as well as smooth clean cut.

With its 3-11/16” cut depth at 90 degrees, the Sawsquatch allows for some large-scale gang cutting of 2×4 studs and 2x lumber in general. Allowing you to cut through 2 boards at once and even “mark” the third with the saw kerf. Just line up the lumber, mark your cut, and go to town.

While the Sawsquatch is heavy, it is still faster and easier to cut some beams and other lumber in place with this saw than to do two cuts with a smaller circular saw or attempt to get a straight cut with a recip saw. I’m a big fan of cutting in place when possible–it avoids measuring errors and helps speed up the building process. This saw makes cutting beams and posts in place quicker and easier.

The Sawsquatch also has some nicely thought-out features. One is copper winding to the motor which helps decrease heat build-up and extends the life of the saw. In addition Skil offers a “Stay True” guarantee. You can try the saw out for 180 days and if you’re not satisfied you can return the saw for a full refund.

The Sawsquatch makes incredibly fast, clean, and straight cuts in even the hardest framing materials like LVL, and frozen PT. It also allows for gang cutting lumber on a scale that is just not possible with smaller saws. Skil has set a high bar in the past and it looks like they’ve met it again. In short this is a well designed, tough saw that can drastically increase productivity.

If you’re a framer or deck builder I’m not sure you can afford not to get this saw. 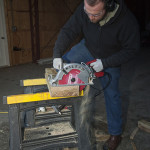 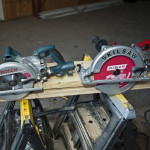 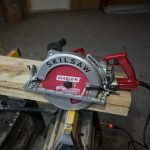