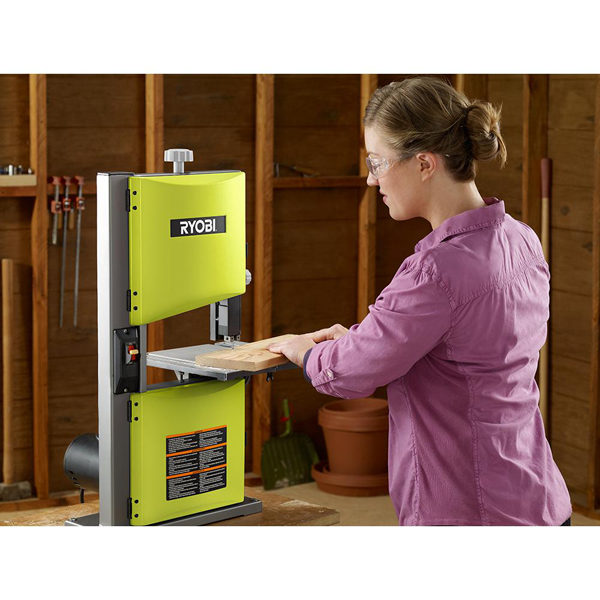 It’s safe to say that most of the wood cutting that most carpenters do is along straight lines with a circular, miter, track or even recip saw.  But life’s not all straight lines and acute angles—sometimes there are curves and changing angles to cut.  With the possible exception of production framers, all carpenters have at least the occasional need to cut a curve or irregularly-shaped line.  That’s where the band saw comes in, and the RYOBI nine-inch benchtop band saw (model BS904G) probably fits that need for many.

A band saw falls between a jigsaw—for cruder and less exact cuts, and a scroll saw—for finer cuts and smaller workpieces.  The jigsaw is smaller and more portable, but is harder to control and is less exact.  A scroll saw is necessary for fine woodworking and wood crafting, but is limited in the size of material that is can handle.  The band saw fills the curve-cutting roles for much of the rest of carpentry.  And there’s really no confusion in the shop or on the job site; you never wonder if a band saw or a jig saw or a scroll saw is the right tool for the job—you just know what the right tool is.

Band saws of course come in many different sizes and power levels.  Big honkin’ motors on heavy floor stands powering wide throat band saws are best suited for production work in a shop.  (The “throat” of a band saw is the distance between the blade and the frame, which is the width of the workpiece that the saw can accommodate.)   Smaller benchtop models like this one are better suited for medium-sized workpieces and have the big advantage of portability, so they can be easily used on a job site.  If you’re doing on-site trim installation or cabinet building, this is the size band saw that’s probably most useful. 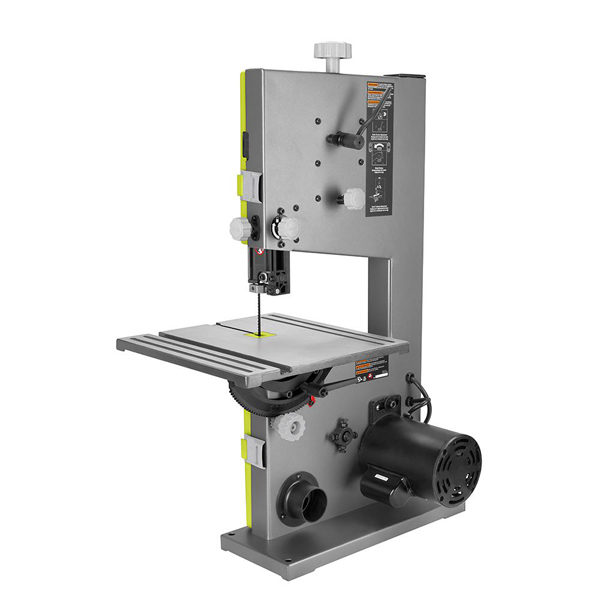 I find the RYOBI nine-inch benchtop band saw particularly useful in the shop for cutting a clamping jig; say one side of your clamp has to attach to an irregular shape like the top rail of an antique chair.  With a band saw you can cut a jig from scrap with one long side matching the profile of the top rail and the other long side straight and at a convenient clamping angle. 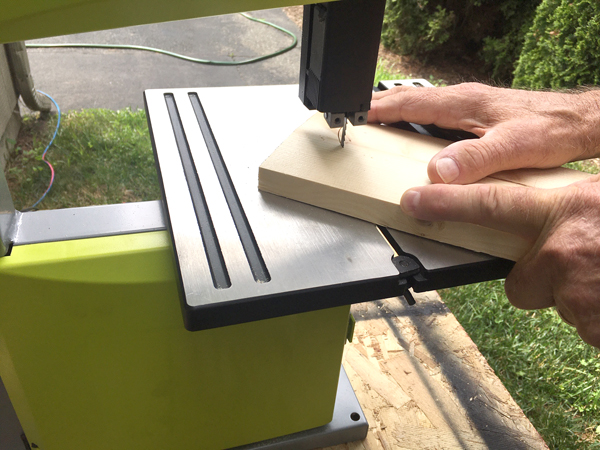 The RYOBI nine-inch benchtop band saw is very easy to assemble — actually it comes almost completely assembled.  You only have to mount the blade on the wheels and the table to the frame.  The instructions are clear, and while there are a couple of little fidgety operations, it all comes together easily.  Indeed I’m pretty sure that if she had an opposing thumb, my pitbull could do the job (to be fair, she’s pretty smart for a pitbull).

You’ll want to square the table to the blade, which is one of those fidgety operations, and you’ll want a small square for the task.  The blade tension will have to be adjusted (which is kinda an intuitive operation based on experience) and the blade set to track properly; all of these things are explained in the manual. 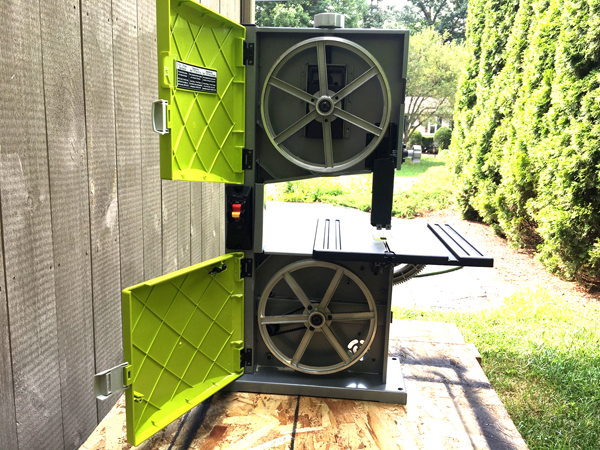 This saw has a blade tension release lever, which is a feature not often found on smaller band saws.  It’s a good thing in that you can easily release the blade tension to prevent the blade from taking a set.  The blade is stabilized with ball-bearing thrust bearings and steel pin friction side guides which are easy to adjust (if necessary). 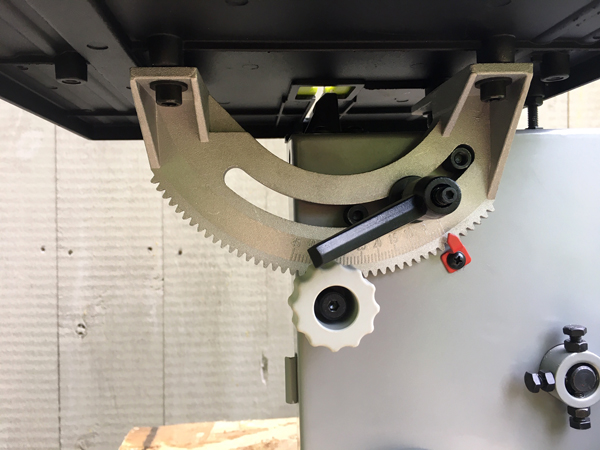 There’s a blade tracking adjustment know on the right side of the unit, a blade tracking view window on the top door, both the upper and lower doors open and close without tools, a rack and pinion table tilt adjustment (the table tilts 45-degrees front-to-back), and rack and pinion blade guide adjustment (the upper blade guide raises and lowers to expose more or less of the blade).  The blade tension is adjusted by a large knob on the top of the saw. 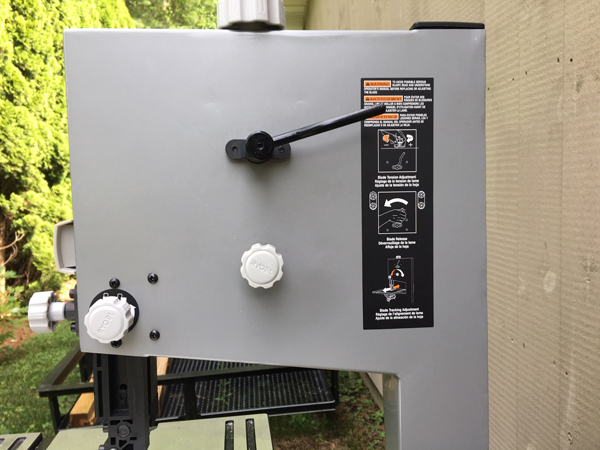 A small cross-cut miter gauge is included, and it mates to a track in the table.  It’s basic, but if you check angles with something calibrated, it’ll get simple jobs done.  Truth be told, not much band saw work involves cross-cutting.  There’s no included fence, but a couple of clamps and a something straight will get the job done handsomely.

As with any saw, the quality of the cut will depend as much on the blade as the saw itself.  RYOBI includes a ¼-inch 6 TPI and this is the blade I used in all testing.  Note that the width of the blade determines the lower limit of the radius you can cut with it.  A good table of those relationships can be found here.  If the included blade doesn’t meet your needs, there are many aftermarket blades on the market that will.

Using this band saw is straight forward (no pun intended).  First, make sure that the upper blade guard is lowered to not much more than the height of the workpiece, so as to avoid excessive blade twisting.  Then go ahead and cut your curve, keeping in mind that if you try and cut too small a radius for the blade width you’ll bind up the blade.  Very simple and easy. 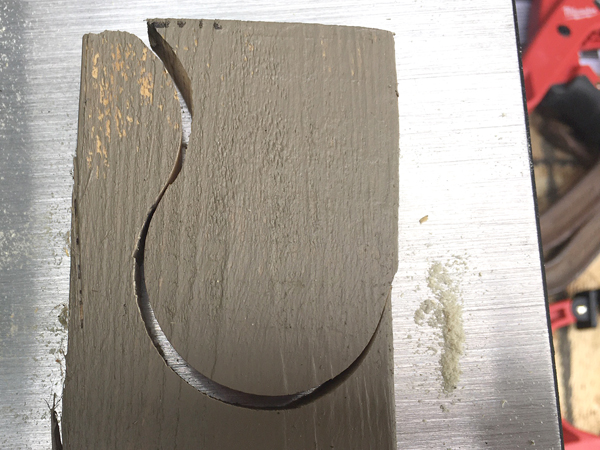 I found that this 2.5 amp motor with the factory blade would cut ¾-inch and 1½-inch KD pine as fast as I could control the workpiece.  Cutting ¾-inch maple was only a smidge slower.  This small band saw isn’t designed for resawing, but nonetheless I tried it.  After clamping a fence to the table, I could resaw a 3½-inch 2×4 half as fast as I could control the feed, which is pretty darn good for a small band saw not designed for resawing!  All cuts resulted in smooth sawn surfaces, requiring maybe just a light sanding for finish work that would show. 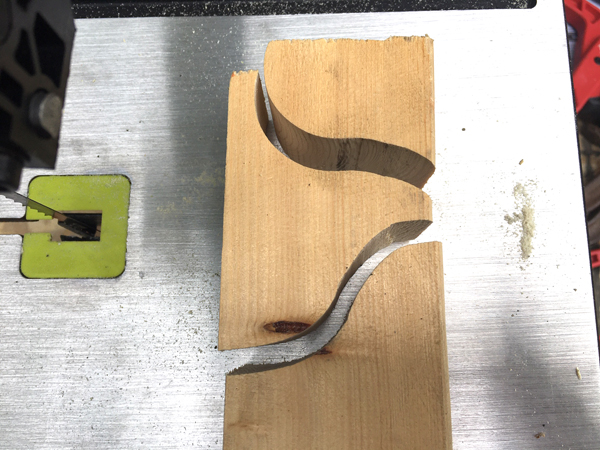 And if you want to cut perfect circles, Rob shows you how to make a jig for that here.

While The Home Depot positions RYOBI as a DIY brand, I’ve lost track of the number of professional tradies —carpenters, plumbers, electricians, tile setters, oil burner techs, and more —who’ve told me that they’ve gotten excellent service from their RYOBI tools.  I have, too.  I don’t use a band saw every day but when I need one I need one.  The RYOBI nine-inch benchtop band saw meets the needs I have for finish work, refinishing, cabinetry, and other miscellaneous tasks, and I fully expect it to continue to do so.  Right now it’s going for $179 at The Home Depot.