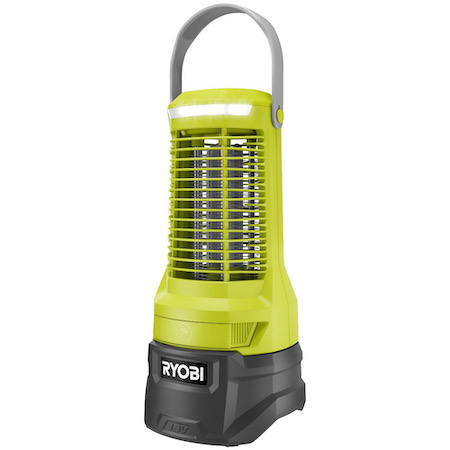 Just like ants can ruin a picnic, mosquitoes and flying insects can ruin an evening get-together on a deck or on a patio.  Ryobi has provided outdoor summer barbecues and camping trips with a solution to eradicating these pesky insects with their new Ryobi 18V One+ Bug Zapper (#P29014BTLVNM).

If you also grew up with a massive electric bag zapper in your backyard, this is not your father’s bug zapper. The Ryobi 18V One+ Bug Zapper stands almost 14 inches tall and it weighs just under 5 pounds with a battery installed.  The Bug Zapper is powered by the Ryobi family of 18V batteries.  I found that the 2aH and 4aH batteries fit perfectly beneath the unit.  When I used a 6aH battery, the battery itself extended ¼” beyond the bottom of the bug zapper.  This meant that when it was placed on a table, the unit rested on the battery and not the bottom of the Bug Zapper.  While it still stood up without any issue, this could have been avoided by making the battery compartment area taller.

I used the Bug Zapper many times in many different locations during the month of July.  The 4aH battery lasted 7.5-8.5 hours each time I used the unit.  With that amount of runtime, the Ryobi 18V One+ Bug Zapper will easily last for an entire BBQ on your deck, or perhaps two nights at your campsite.  There was no loss of power as the battery slowly drained, so it will kill insects until the battery is depleted.

The Ryobi 18V One+ Bug Zapper uses a replaceable UV light bulb that is installed behind a metal mesh cage.  The light bulb arrives well packaged and needs to be connected prior to its first use.  While the UV light appears to be sturdy, I would treat the light bulb carefully and avoid dropping the unit to prevent any breakage. 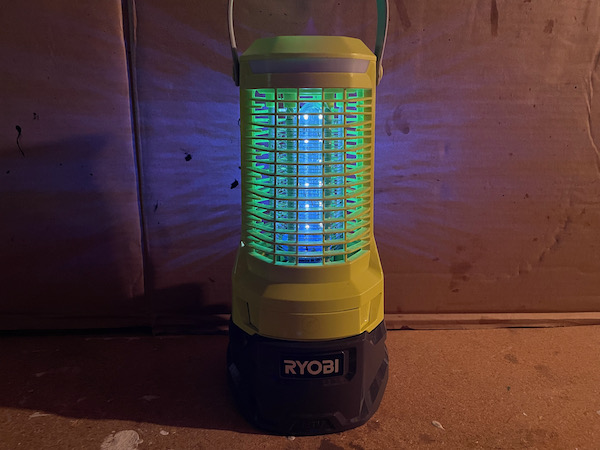 When paired with an 18V battery, the Bug Zapper delivers 2550 volts of insect-killing power.  After multiple uses, I can attest that the UV light definitely attracts all kinds of bugs.  The Bug Zapper doesn’t use any scented attractants to lure insects to it—the UV light alone draws bugs towards it.  When it’s turned on, there is no hum or noise whatsoever coming from the UV bulb.  All you see is the pleasing blue light until that first bug arrives!

Ryobi recommends that you place the 18V One+ Bug Zapper 6-7 feet off the ground when it’s deployed.  Here at home, I usually hang the Bug Zapper from a shepherd’s hook using the large durable rubber handle.  I have also used it atop a table.  I found both locations to be effective, but I do recommend you place it several feet away from you once the carnage begins. 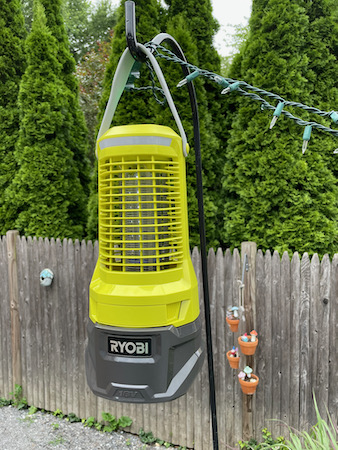 Atop the unit, there is a power button with presets for operation at 2 hours, 4 hours, and 6 hours.  I used each setting several times and the Bug Zapper operates for exactly the time stated and then the unit turns itself off.  These preset operation times are a great way to save battery life, though it does prevent you from operating it overnight in an area swarming with insects.

When the bugs are attracted to the UV light, they usually meet their end by contacting the metal mesh and the 2550 volts of power surging through it.  Smaller bugs are usually exterminated after 1 zap of the 2550 volts.  The sound itself and the visual spark are great indicators that the bug met its end.  Larger moths might not die immediately, but they are certainly stunned initially and die after touching the metal mesh again.  I did find the largest bugs would often result in an extended “zapping period” and the smell of a burning bug was definitely detected.  The 2550 volts were even capable of killing larger beetles with their hard exoskeletons.  Admittedly, there is a level of satisfaction in hearing the “zap” of a pesty insect inside the Ryobi Bug Zapper.

Portability Is A Plus

A real plus for the Ryobi Bug Zapper is its size and portability.  It can fit almost anywhere and it doesn’t need to be plugged in for power.  You can bring the unit with you wherever you go.  Where insects might be a concern, the Bug Zapper will be a welcome addition to the party.

Here at my house, I didn’t have many bugs in the yard until after 8:00 pm.  It took several nights to witness how effective it was.  When we brought it on vacation to a rented lake house in the woods of New Hampshire, the insect massacre was astonishing.  So many insects arrived on the deck at dusk and they were all attracted to the UV light.  There were bugs being zapped every 3-5 seconds.  We could hear the slaughter through the sliding glass door and worried that the neighbors would complain!

While the Ryobi Bug Zapper is definitely an efficient insect killer, I did find that some insects remained in the air, which is understandable since I have never found anything 100% effective at deterring flying insects, even DEET.  Please don’t expect this Bug Zapper to kill all of the biting mosquitoes and gnats in your yard, but it will certainly reduce the number. 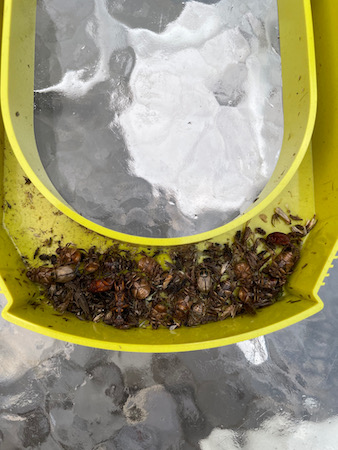 Ryobi stated in the manual that the Bug Zapper can withstand moderate rainfall, but it should not be left outdoors during severe weather events.  Just to be safe, I never used it in the rain.

Cleanup Of The Ryobi Bug Zapper

The insects that are killed fall into a removable yellow plastic tray.  Using your thumb and forefinger, you can slide the 1-inch-deep tray out to reveal the bead bugs.  The tray can hold many insects and it can be easily emptied by knocking it against a hard surface. 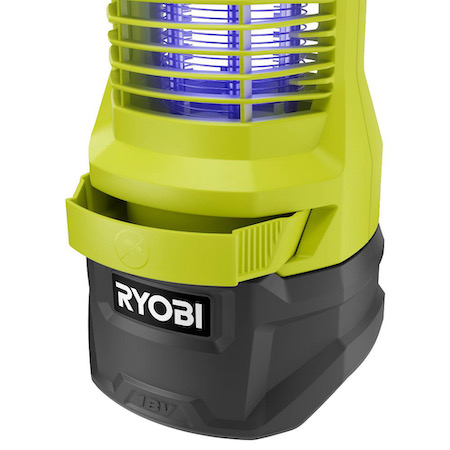 In addition to cleaning the tray, I would recommend opening the unit to remove the insects trapped inside.  Holding the base with one hand, twist the top counter-clockwise to unlock the two pieces.  Then you need to carefully lift the yellow unit straight up to reveal the light bulb.  There are often many dead insects around the base of the light bulb that can be brushed off.  The metal mesh cage is attached to the plastic body with screws.  I found that a blower or a bottle of compressed air was very effective when trying to remove the bugs that were stuck to the metal mesh.  Many deceased insects get caught inside the metal mesh, so it should probably be cleaned out after each usage. 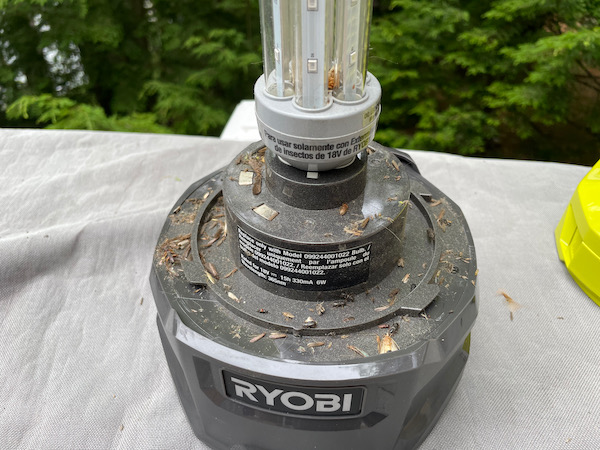 While most insects are killed by the 2550 volts of powered metal mesh, some insects do survive and they get trapped inside the metal mesh, the plastic body, or the removable tray.  These insects can be released when you lift the top up to clean it out, so always perform any clear-out of insects outdoors.  I am not sure if the insects were not killed by the voltage, or if they simply became trapped inside the unit.  Nevertheless, I have often found several surviving insects at the end of the night.

The Ryobi 18V One+ Bug Zapper includes an LED light on each side of the unit.  The light area is not very large at 4 inches wide and 1/2 inch tall.  The power button for the light is atop the unit, immediately to the right of the UV light power button.  The LED light can operate independently of the Bug Zapper and it’s not limited by the 2, 4, and 6-hour preset constraints—a nice option for a night light in a tent! 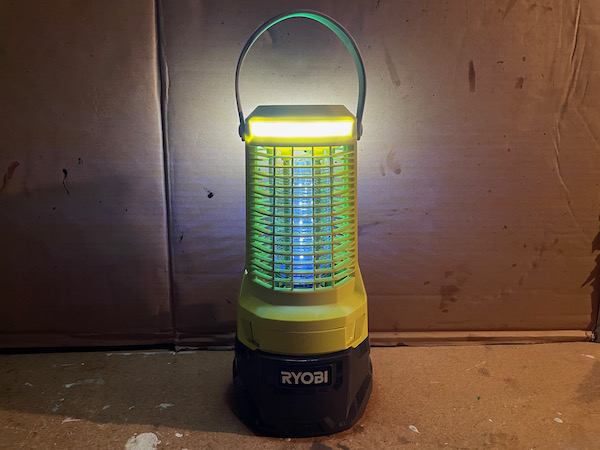 One press of the light’s power button will start it at low (9 lumens), and successive presses will bring it to medium (18 lumens) and finally high (30 lumens).  The LED light is a nice touch since the bulb shines on both sides of the unit.  The lumens produced will not be enough light to read a book by, but it does add some additional ambiance to your patio barbecue.  My guests and I appreciated the inclusion of the LED light in the design of the Bug Zapper.

We enjoy fresh fruit in our house, but we don’t appreciate the minuscule fruit flies that mysteriously show up with this fruit.  The Ryobi Bug Zapper has been very helpful in exterminating these fruit flies in a sanitary and discreet manner.  The nuisance house flies that invade your house can’t resist the lure of the UV light and they are quickly eliminated, as well.  Killing fruit flies and house flies inside your home with the Ryobi 18V One+ Bug Zapper is just another added benefit to owning it. 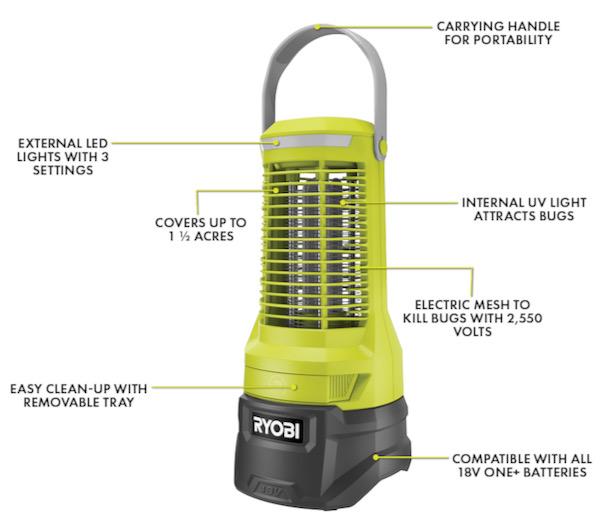 The new Ryobi 18V One+ Bug Zapper arrived in time for summer patio season and I couldn’t have been happier.  This Bug Zapper is going to provide you with approximately 1 acre of bug-killing coverage.  The insects are lured to the UV light like a fish to a worm.  The majority of the insects that meet the 2550 volts of power are quickly exterminated and dropped into the removable tray.  While not every bug meets its end inside the metal mesh cage, the nuisance insects that do perish inside it are plentiful and they will no longer interrupt the dinner on your patio.  If you also enjoy outdoor entertaining, invest in the Ryobi 18V One+ Bug Zapper to reduce the insect population in your backyard.