How To Replace A Deck Footing Threaded Bolts Concrete deck footings and piers are designed to support the weight of a deck.   In a perfect world deck posts are supposed to rest securely and centered on these footings with a threaded anchor or J-bolt holding it down.  Anchor bolts are designed to resist post movement and deck uplift from high winds.

Most deck footings these days are either poured in place or precast and then hoisted down into an excavated hole.

When poured in place most folk s use “Sono-tubes” or an equivalent concrete form.  These forms are simple to use, easy to install resist settling, uplift caused by frost and result in a stronger deck footing.

What To Do With Misaligned Anchor bolts

Many times the anchor bolts used in the concrete forms are neither centered nor lined up properly and need to be redone in order to properly secure your deck post to the concrete footing.

Using galvanized, adjustable post base plates allow 1/2-inch discrepancy in any direction if you have made an error when placing footing anchor bolts.

Sometimes 1/2-inch is not enough as everything needs to line up as precisely as possible.  Even with adjustable post bases you sometimes have to cut your losses and start over. Once you’ve come to the conclusion that the anchor bolt you have is in the wrong location and it needs to be removed, you can get started fixing it.

TIP: Threaded studs are an alternative to J-bolts and you can install them after the footings have cured.   Using this method could reduce errors.

By following these simple directions you are well on your way to learning  how to repair concrete deck anchor bolt when placed in the wrong location and having a safe and healthy deck! 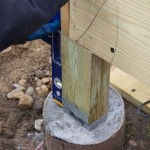 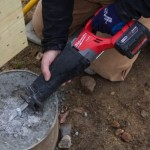 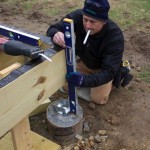 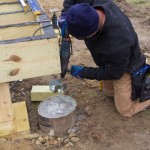 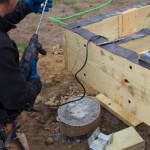 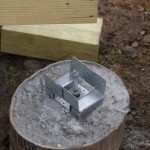 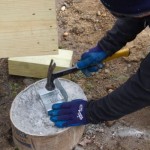 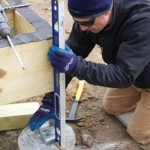 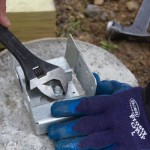