A recent update from DEWALT is sure to raise eyebrows, it’s release of the upgraded DEWALT Gas-free Cordless Framing Nailer DCN692.

Redesigned with a brush-less motor and paired with a XR 4.0AH lithium ion battery pack enable the DCN692  to drive up to 700 nails per charge. Why Did DEWALT Look to Battery vs Gas?

Having spoken to a number of end users of cordless nailers, DEWALT learned that gas tools are costly, requires a lot of maintenance, and is often times unreliable.  This emphasized that the market was looking for a non-gas solution for the framing tool.   Having successfully launched the cordless finish tools in 2004, they knew that this would be the preferred solution for the market.

DeWALT sees this tool as competing directly with any cordless framer in the market today.  That would include Paslode, Hitachi, Senco etc.

General Contractors, remodelers, punch list guys, deck builders, fencing, sheathing users are all target end users for this tool.  DEWALT does not expect that the high volume production framers would this tool as an everyday tool, but expect that they would add it to their job box for those situations where they do not want to roll out the compressor and hoses.

The DCN692 is a gas-free, dual-speed, cordless framing nailer that is powered off a 20volt XR battery.   This nailer will fire 2 inch to 3-1/2 inch framing nails. DEWALT claims that the DCN692 will shine in the area or minimal maintenance, and workability in cold temperatures. Two areas where gas cartridges suffer.

Redesigned with a dual-speed and low vibration technology the DCN692 allows the user to select between speed setting 1 or 2.  The differences in the speed are:

The electronic switch changes the speed of the motor in the different settings.  The motor will spin at a lower RPM on Speed 1 and higher RPM on Speed 2 – So if you understand the flywheel concept of storing energy, at the higher RPM, more energy will be stored in the motor at Speed 2 and therefore more energy will be transferred to the driver blade to give it the added power when sinking longer nails or even the shorter nails when nailing into denser lumber.

How the DEWALT DCS692 Works:

The tool operates from a flywheel design.  If you are familiar with this type of technology, the brushless motor spins upwards of 10K RPMS and stores energy from this spinning motion, once the driver blade contacts this spinning motor, the energy is transferred to the blade and it pushes forward to actuate the tool. There are return springs which sets the driver blade back to its original position and then the cycle will repeat.

Does Cold Weather Affect the Tool?

I used the tool in 0° C temperatures, DEWALT has tested it at -20°C and you should not see any issues at these low temperatures.  This is indeed a benefit over gas since gas contracts with cold temperatures, it leads to unreliable function and much frustration from contractors in the field.

A switch allows users to select bump or sequential fire modes for different fastening applications as well as adjust the nail depth when firing nails into different materials.

DEWALT’s research showed that bump mode is the preferred mode of operation for framing and sheathing applications.  These applications are not like finish work where precision placement and not marring the wood surfaces are important.  Speed is a very important factor for framers so it was important to have this mode on the tool.

Indicator lights warn the user of a low battery or stall, and a stall release lever allows the user to reset the driver blade caused by a stall or jammed nail.

Each full rotation of the depth adjust knob is 2mm of movement. Each click is approximately 1mm allowing users to fine tune the depth setting of the nail.

The stall release lever is to reset the driver blade in the event that it gets stuck in the down position. This can sometimes happen when nailing into really dense wood or if you hit a knot in the wood.  When this happens in a pneumatic tool, since there is very little resistance on the inside of the tool, the end-user can easily push the driver blade back into place.  This cannot be done on the DCN692 since it has a lot of moving parts on the inside of the tool.  This stall release lever releases the tension on the driver blade and resets it to the start position.

We used the DEWALT DCN692 nailer in the shop and in the field.   In the field this nailer worked flawlessly. We did some speed testing in the shop.

We also did some endurance testing by continuously firing the nailer until failure or battery drain.   We used the same 12d nails.  DEWALT claims the nailer will fire up to 700 nails. We  stopped only to reload the nailer and fired 504 nails before the battery drained and on a second test we got close to 600 but lost count toward the end.

DEWALT  claims that the more you use this nailer to closer you’ll get to the 700 nails per charge depending on length of nails, density of material, bump or sequential mode operations.

They claim that the nailer has a break in period, similar to a car.   The jury is still out on that and we’re still using it in the field testing! At 7.7 pounds its as heavy as most framing nailers.   This nailer takes 55 nails. The fact that I was bump firing a cordless nailer was mind blowing to me – I’m still impressed. We found this nailer easy to use, load and surprisingly powerful.  The depth or drive and bump and sequential switch is simple to operate and the speed switch has a handy label to remind users which speed to choose. We liked the two “idiot lights” on the rear of the tool that notifies the user or a stall, jamb or battery drain.

The DEWALT Gas-free Cordless Framing Nailer DCN692 will be available this February and in the following configurations: 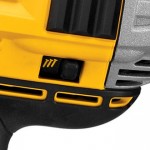 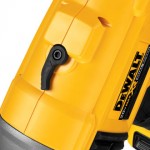 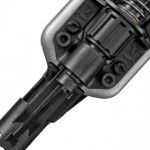 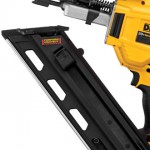 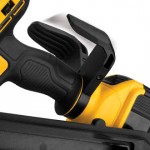 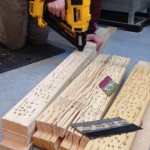 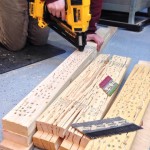 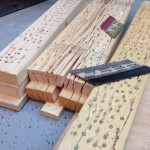