Yesterday at the Remodeling Show in Baltimore I was able to look at the new Bosch Axial-Glide™ Glide Miter Saw, model GCM12SD.

This new saw is different from other sliding miter saws because it DOESN’T SLIDE!

This new design is more compact for the work site or workbench. The saw still has the depth of cut a sliding miter saw has, but you can push this saw right up ti a wall and not have to worry about or leave room for the sliding rails.
From what I can gather, the change in design is more with the way the saw moves. The sliding rails were replaced with an articulating arm. BOSCH calls it their Axial-Glide™ system.
According to BOSCH, “Beyond giving the GCM12SD its distinctive profile, Bosch’s Axial-Glide system eliminates three key challenges miter saw users have endured since the first slide systems debuted many years ago. “
“While the traditional sliding compound miter saw approach enables users to make wider cross cuts, that system takes up more space and is prone to misalignment and stickiness over time. By replacing the sliding rail system with a hinged or articulating glide arm system – similar to the linkage used in a four-bar suspension design – Bosch created a more compact miter saw that delivers durable precision, remaining true and smooth over time. “

The Axial-Glide system operates by folding the articulated arm flush with the back of the saw, saving up to 12” of workspace versus a traditional sliding compound miter saw and enabling the saw to be operated with almost no clearance behind it; ideal for job sites and cramped workshops.

They did this by removing the sliding rail assembly and replacing it with cast-aluminum arms.
Bosch has built a saw that remains aligned and calibrated even in harsh conditions I saw this in person as one of the BOSCH reps beat the back of the saw with a 2×4 and then made some sweet cuts!
The new Axial-Glide system provides 14” of horizontal cutting capacity, a 6-1/2” max vertical cutting capacity against the fence (for base) and a 6-1/2” cutting capacity when cutting crown molding (45◦ spring) against the fence.
In the next few weeks I am hoping to review one of these saws for you and put it through some job site rigors!! Stay Tuned! 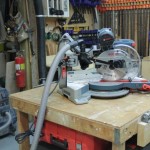 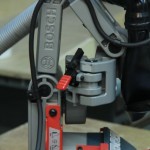 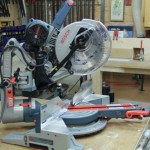 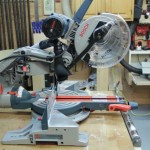 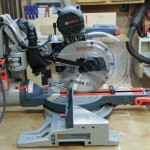 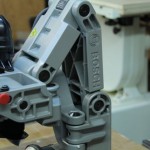 Laser Guide For The Miter Saws