The RYOBI 18V Cordless 8 ¼-inch Table Saw is a new offering from RYOBI, available as are all RYOBI tools exclusively from The Home Depot.  Part of RYOBI’s One+ HP line, the RYOBI ONE+ HP 18V Brushless Cordless 8 ¼-inch Compact Portable Jobsite Table Saw (its official name, model PBLSTS01) is a portable, carryable package designed for situations where a cordless saw has advantages. 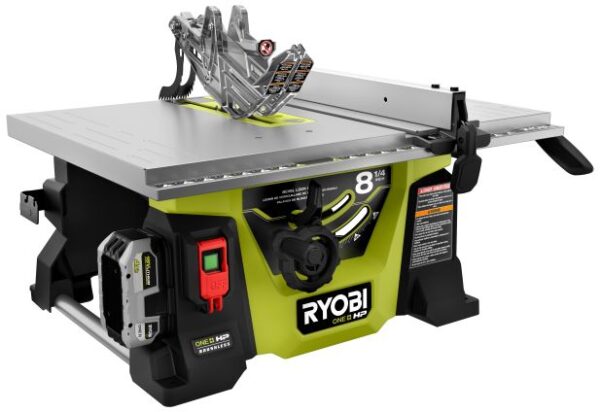 I usually think of a table saw as a corded tool with even the jobsite models generally fixed in one location for at least the work day.  But that just shows my assumptions may be a bit outdated.

First, cordless (battery-powered) tools have become much more powerful over the last several years with many shops, such as Rob’s (Rob IS The Concord Carpenter) running most jobs almost entirely cordless these days.  Second, cordless tools cut down on the seemingly endless number of 120-volt cords and extension cords that are littered around most jobsites.  That’s not just convenient but safer as well.  We’ve all tripped over cords (a lot!) throughout the years.

Third, there are situations where a cordless saw is the best choice, if not the only choice.  You may be working in a building with power shut off, or on a new jobsite without a temporary service yet.  You may be in a location with no power available at all; my favorite example, because it is applicable to the rural area I live in, is that of building a run-in shed for horses (or any animals that you keep) in the far corner of the north forty.  Also, if you have to move your saw a lot during the day – think of a trim carpenter moving from room to room – it’s a lot easier to just pick up the RYOBI 18V Cordless 8 ¼-inch Table Saw and move than is to move your corded saw, being careful not to trip on the cord, find power as close as possible to the new location, and run a trip hazard to it.  Time is money after all.

Finally, if you have to make only a couple/few cuts then grabbing a cordless saw out of the truck will be a lot easier than setting up a corded one. 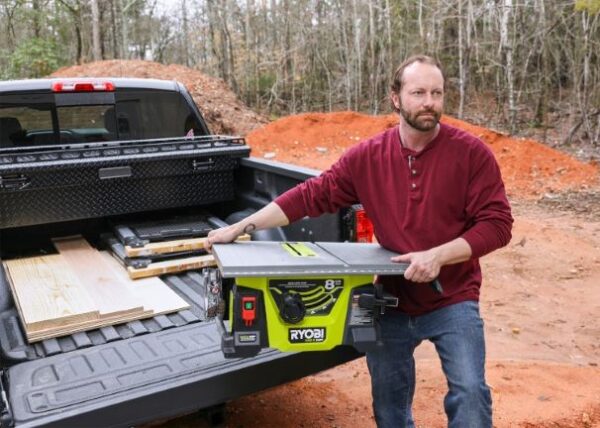 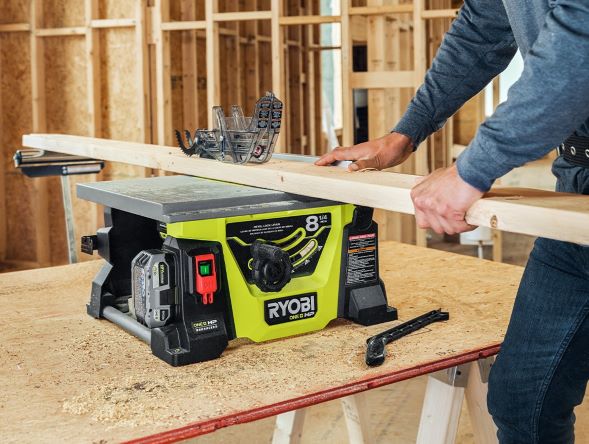 The good.  The saw is a little heavier than expected due to its steel frame, and I mean that as a good thing.  In fact, it weighs in at about 33 pounds, so it’s not at all difficult to carry around.  It has the usual adjustment capability for setting the blade to 90- and 45-degrees, and adjustments for setting the blade parallel to the miter slot (see image below), but this saw came from the factory spot on.  I wasn’t surprised, as an earlier RYOBI cordless sliding miter saw that I reviewed came with astonishing accuracy out of the box.  The rip fence (not a rack-and-pinion one unfortunately) locks crisply and square to the table. 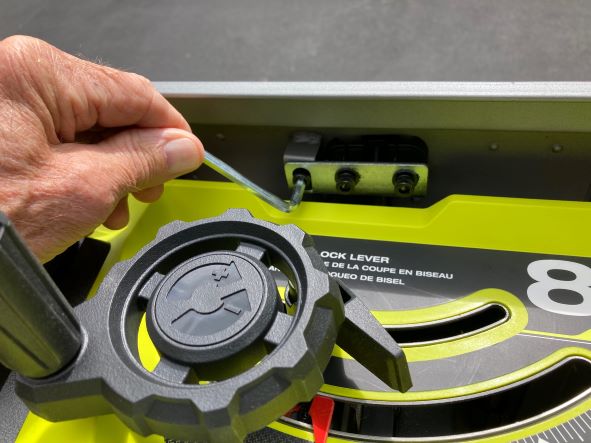 On the minus side, the table was out of flat by about one paper thickness diagonally in one direction, across the main part of the table (the table to the left of the miter slot).  That’s not a problem, but along one diagonal across the entire table it was out of flat by about 4 paper thicknesses which may be an issue for the fine work (but see my conclusions below for context). 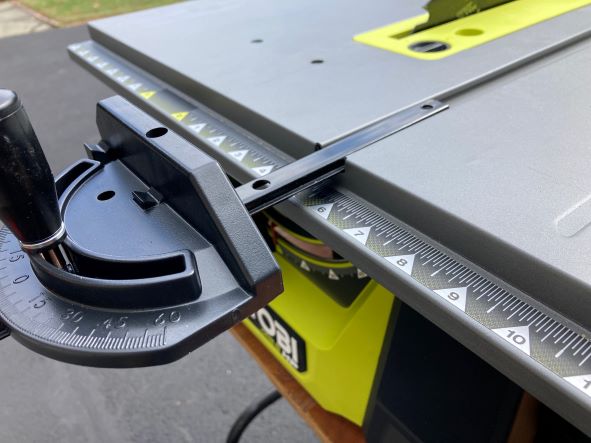 While all miter gauges from all manufacturers on jobsite saws aren’t very good, the miter gauge on this saw was pretty sloppy in the miter slot.  To put that last criticism in context though, if you have to make anything but the roughest miter cuts you should be using a miter saw anyway.  That’s standard practice and everyone knows it.  RYOBI makes a number of cordless and corded miter saws for that need.

The included blade is a 24-teeth affair, with what looks like teeth for rough cutting.  But to my surprise they cut all the wood below cleanly with very little tear-out.

There is no dado capability with this saw, which is hardly surprising.  A dado blade sucks up a lot of power and of course battery charge is a scarce resource.

There is a lot of on-board accessory storage, specifically for the fence, miter gauge, push stick, blade wrenches, and guard.  Although I don’t know of anyone who takes the guard on and off on a regular basis, the storage hook for it hardly gets in the way of anything.

To be honest, I didn’t expect much power from an 18-volt saw.  I was wrong.  When you first power the RYOBI 18V Cordless 8 ¼-inch Table Saw up you can hear, and almost feel, the surprising amount of power that the 4500 RPM blade puts out.

I don’t test cutting tools by how fast I can shove material through them until the motor chokes or smokes; that’s neither fair nor at all representative of the way a tool is used for real.  What I do is to feed different materials through the blades as fast as I can control both the tool and the material feed.  Sometimes the tool can’t keep up and sometimes it can.  In this case the RYOBI 18V Cordless 8 ¼-inch Table Saw kept up without any slowdown, ripping through 2X PT, ¾-inch pine, ¾-inch maple, and ¾-inch oak.  Again: I was pleasantly surprised by the power of the RYOBI 18V Cordless 8 ¼-inch Table Saw.

Run time.  Everyone loves to talk about run time on a battery charge when discussing cordless tools.  I think it’s largely irrelevant.  1) If you’re on a site with power you can swap out batteries from a charger in a couple of seconds.  I’m more concerned with how a battery’s weight affects the balance of the tool than with that particular battery’s run time.  2) If you’re on a powerless site, then shame on you for not showing up with a sufficient number of charged batteries.  3) The RYOBI 18V Cordless 8 ¼-inch Table Saw isn’t designed as, nor will it be used as, a production tool.  It’s not going to be running seven out of eight hours a day.  4) Run time is dependent on the Ah of the battery used, and all manufacturers make batteries of varying Ah ratings for all their tools.  The RYOBI 18V Cordless 8 ¼-inch Table Saw Kit comes with two 4Ah batteries, but RYOBI makes 6Ah batteries, as well as smaller ones, and probably larger ones in development.

For all the applications mentioned at the beginning, the RYOBI 18V Cordless 8 ¼-inch Table Saw is a good bet, with 1½  caveats.  While it is (or can be) well calibrated, and has plenty of power, its main weakness is the lack of precision in the table flatness and, if you just have to use a miter gauge, in the supplied miter gauge (but as discussed above this is never a precise option on any jobsite saw).  For cordless sites or small-jobs/punch-work on any rough or paint-grade site it will do the job well.  If you are doing stain-grade work you’ll just have to be a little more careful.  But whenever I’m doing stain-grade work I always cut about ½ to ¾ a kerf extra length and make the final fit with sandpaper anyway.

All in all, I was surprised – in a pleasant way – with the RYOBI 18V Cordless 8 ¼-inch Table Saw.  When Rob asked me to look at it I wasn’t certain it was a tool that I’d find a place for in my lineup.  Well, I have!  Give it a look yourself.