By Robert Robillard on Home And Personal Safety, Weekend warrior From Vincent Iannelli, M.D., Most parents are concerned about the safety of their children and do their best to provide them with a safe environment, including using car seats, seat belts, life preservers, bicycle helmets, and gates on stairs, etc. Too many parents forget about gun safety though.

Firearms Are Leading Cause Of Death In Children

Having a gun in your home, especially if it is not stored properly, can be a significant risk factor for injury and death in children. Gun safety is a serious matter. In fact, firearm-related injuries are a leading cause of death in children and include deaths from unintentional injuries, homicide, and suicide.

411 children (age 14 and under) died from gunfire in all of 2012 or slightly more than once per day. This includes homicides, accidents, and suicides combined. A New York Times review of hundreds of child firearm deaths found that accidental shootings occurred roughly twice as often as the records indicate, because of reporting and classification idiosyncrasies.

An even larger number of children are hurt by nonfatal gun-related injuries. Although gun-related injuries peak in adolescence, they can also affect infants and younger children. Younger children are most likely to be injured, either shooting themselves or a playmate, after playing with a gun that they have found in the home, not realizing that the gun is real or that it is loaded. It is estimated that there are guns in half of all of the homes in the United States. Although most of these guns are purchased for recreational or safety reasons, it is important to keep in mind that a firearm in the home is much more likely (up to 43 times more likely in some reports) to kill or injure a family member or friend than an intruder.

A recent analysis by the Annals of Internal Medicine revealed that easy access to firearms doubled the risk of homicide and tripled the risk for suicide among all household members. Family violence is also more likely to be lethal in homes with firearms.

Many parents incorrectly assume that their child is educated about gun safety, can tell the difference between a real gun and a toy gun, and would know not to handle a real gun.  Until the trigger is pulled, the differences between an Airsoft  Glock pistol and a real Glock are next to impossible to distinguish.

The guns are, by design, realistic copies of the firearms they’re intended to replicate. They’re sold with blaze orange tips, but many times people remove the orange safety color.

Police officers are facing more realistic-looking fake or replica guns all the time. Even under the best circumstances, police officers do not have the time or are in a position to judge whether a gun they are facing is real and often are only able to make a determination after it’s too late. What Do Boys Do When They Find a Real Gun?

Children are naturally curious and if a gun is not stored properly, there is a good chance that a child may find it and injure himself or someone else.
In the study, “Seeing is Believing: What Do Boys Do When They Find a Real Gun?” 29 groups of boys aged 8-12 years were observed in a room where a gun was hidden. Many of the children found and handled the gun, and half of the children actually pulled the trigger.

Most of the children that handled the found gun and pulled the trigger had previously received gun safety education. This study helps to prove that to keep your children safe and prevent firearm-related injuries, it is important to restrict their access to guns.

Proper storage of a gun includes keeping the gun in a gun safe, gun lockbox, or a  cabinet or drawer that is securely locked.  The gun should also be stored unloaded, with the bullets locked separately. 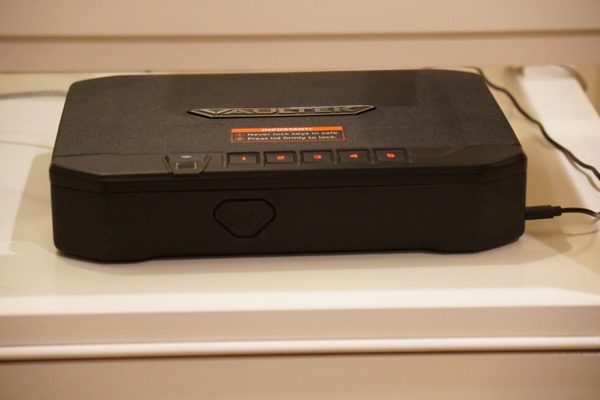 Steps You Can Take to Ensure Child Gun Safety: Trigger Lock Safety Note –  Trigger locks are not designed to be used on loaded firearms. The trigger lock’s locking mechanism involves a small rod that slides through a gun’s trigger guard. This rod is positioned close to the trigger, and when improperly, installed or installed /removed on a loaded firearm, the risk of that bar engaging the trigger, is real.

Because of the number of injuries from guns, which many says has reached epidemic levels, programs have been developed to educate parents and children about gun safety.  These include the Eddie Eagle gun accident prevention program from the National Rifle Association, which educates children who find a gun to ‘Stop! Don’t Touch. Leave the Area. Tell an Adult.’

The American Academy of Pediatrics also has a “Keep Your Family Safe from Firearm Injury” program that educates parents about gun safety and advises ‘the safest thing is to not have a gun in your home, especially not a handgun.’

Teach Kids What To Do If They Find A Gun

Even if you don’t have a gun in your own home, it is important to educate your children about firearm safety in case they discover a gun outside the home or in the homes of their friends. As a parent, at a minimum, I recommend you learn and teach your kids the 4 steps of the Eddie Eagle gun accident prevention program:

You should also discuss gun safety with other parents or family members if your child spends time in their homes. It is not enough to assume that if they do have guns in the house, or that they have them stored properly. As an adult and parent taking steps to properly secure a firearm is not only the responsible and safe thing to do but it’s also the law. Utilizing a gun safe can provide security and reliability to keep your firearm safe and secure from unauthorized access.

Ultimately, if you have children in your house, you have two choices: consider getting rid of your guns or learn to store them properly.

Getting Rid Of Your Gun

If you do decide that you want to get rid of your guns to protect your children, you can look to see if a gun ‘buy back’ type program is available in your area. You can also call the non-emergency number of your local police department and ask if they will pick it up.

Many communities also have free gun lock and/or trigger lock giveaway programs, however, in light of empirical reality, the safest policy is not having a gun in the home.