If you’ve been following the Tool Box Buzz crew’s head-to-head reviews you’ll have noticed that Kobalt pretty consistently punches above its weight…that is, performs above its price point.  That’s the word on the street, too, and well as in many other reviews.  So I was happy to get my hands on the new Kobalt 24-volt Cordless Compact Router (Model #KR 124B-03) and take it for a spin.

Compact router, palm router, trim router…call it what you will, but every carpenter has a need for one, somewhere between occasionally and often, and every DIYer will find one extremely handy.  OK, maybe a Type 4 production framer might not need one, but certainly a Type 3 carpenter will, and that’s probably the majority of working carpenters out there. 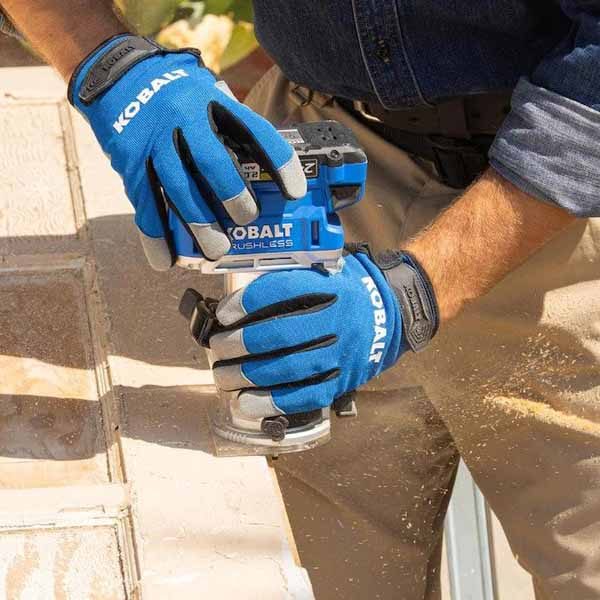 First a word about the place of cordless tool in professional practice.  Cordless tool have of course taken over the market in recent years, and the constant improvements in battery technology have made many of them serious contenders on the jobsite, more and more often able to replace their corded counterparts without compromise.  But I’m completely cordless yet.  In fact, if you go to any large construction project today (the kind that take up whole city blocks), or even to a local residential remodeling job, you’ll find lots of old-school corded power tools doing their thing.  Partially this is because the large project firms haven’t committed to a single battery platform yet, and partially it’s because cordless tools have—like all tools—their pros and cons.  Mostly, cutting the cord comes at the price of battery management.

Don’t get me wrong — I love cordless tools in their right place; I have — and use — a lot of them.   There are two main situations in which cordless tools shine.  You’ll need cordless tools if there’s no power on site — say you’re building a run-in shed for the horses on the far corner of the north forty.  On the other hand, most job sites have power, and one of the first things on a new jobsite (after the Port-a-Potty) is a temporary service.

The main advantage of cordless tools, in my opinion, is their convenience when you have to bring the tool to the work piece.  Here you don’t have to find a plug, or run an extension cord, or deal with the cord getting in your way.  If by contrast, you’re bringing the work piece to the tool, that tool is usually stationary and fixed (at least for the day) and powering it is usually not much of a big deal.  Think of the difference between using an impact driver to sink fasteners all over the jobsite, compared to bringing a length of stock over to a table saw.  In the first case you don’t want to deal with a cord and managing batteries is a small price to pay; in the second case plugging the saw in is no big deal, and you don’t have to worry about batteries getting depleted.

With regard to a compact router, going cordless will let the tool maximize its usefulness, because these smaller routers are in fact often used with the workpiece in place.  Cordless models give you the capability to do that, whether the workpiece is an in-place window sill, door casing, cabinet…or what have you.  Since in these situations you’re often working from an odd, if not uncomfortable—and sometimes downright unstable, position, the lack of cord management and/or the cord getting in your way, is truly worth keeping the battery charged.  True, if you’re working on a bench that advantage may not be so great, but to cover all bases every carpenter and DIYer should have a cordless compact router in their bag of tricks. 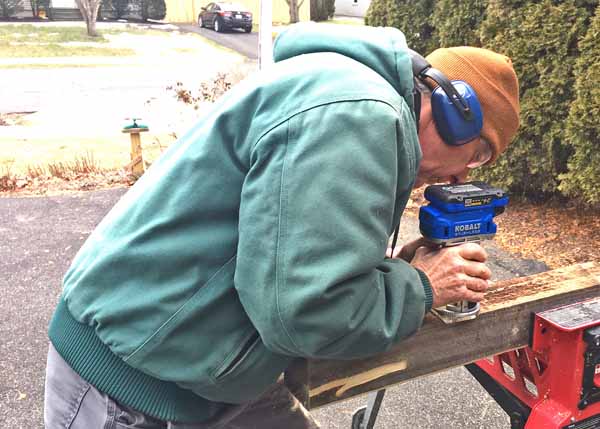 Speeds, feeds, and other specs

The Kobalt 24-volt Cordless Compact Router has these features: 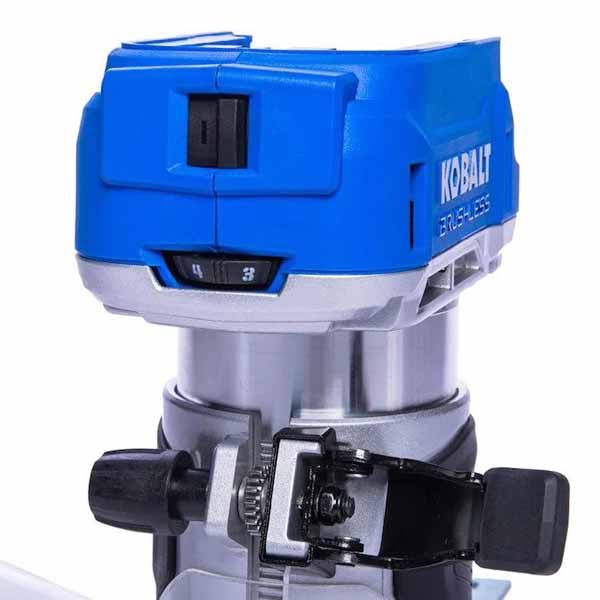 If you’re new to Kobalt, then you’ll need a battery (or two) and a charger.  This set is a great starter set, and it includes the slim 2 Ah battery.  I like to run a cordless router with a smaller battery so as to minimize the inherent top-heavy nature of the tool.

A corded compact router will have the bulk of its weight in the barrel that houses the motor.  A cordless compact router, by contrast, has to carry its power source on top of the motor, making the unit more top-heavy—and a little trickier to balance—than a corded version.  That’s why I prefer to use a slim, small battery on a cordless compact router; I can easily swap batteries if I run the battery down. 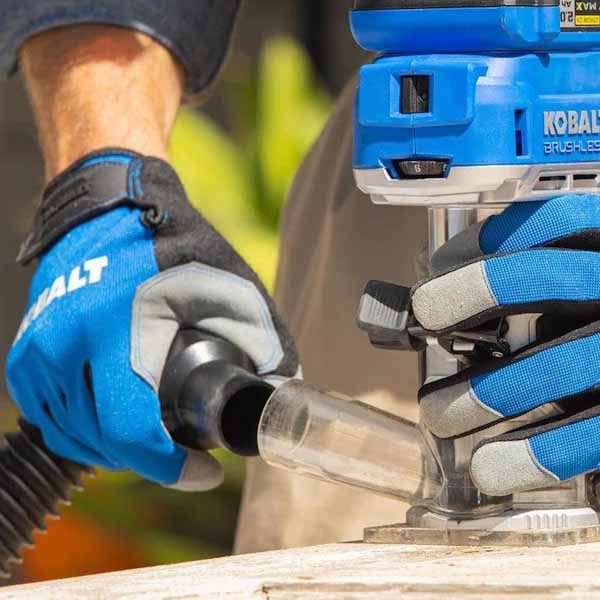 The barrel grip area on this Kobalt router is 2¾-inch in diameter.  My dead-average size hands have no trouble running it one-handed, although I prefer to stabilize the tool with two hands whenever possible.  The soft-start feature works as expected, and it takes about 2-3 seconds to spin down the spindle.

The power switch is on the front top of the tool, as is common on this type of router.  You can’t reach it while gripping the router, which some commentators don’t like.  It doesn’t bother me at all, though; a router is a tool that should be operated carefully and deliberately, with thought and focus.  With is sharp, exposed, rotating blade a router is far less forgiving, hemoglobin-wise  than, say, an impact driver.

With the slim 2 Ah battery installed the router is easy to control when routing on a bench, and surprisingly easy to hold, balance, control, and use even when reaching overhead with one hand (so long as you can get enough strength behind the tool). 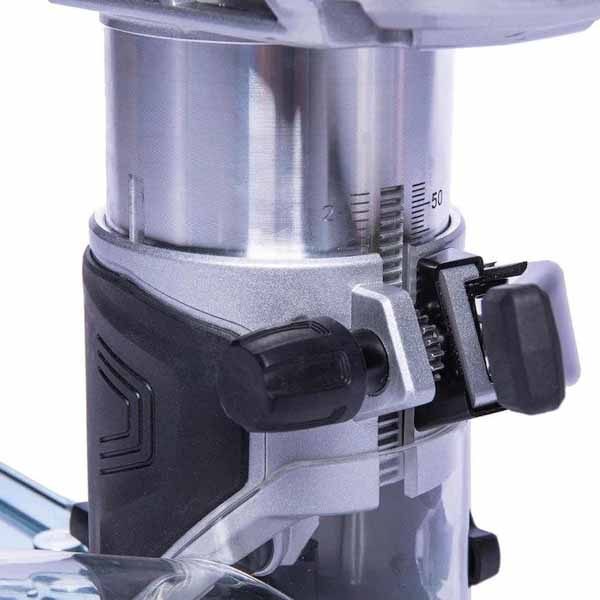 The performance of a router, like any cutting tool, is dependent as much on the cutting blade as the tool itself.  I used some decent, but not superlative, quality new router bits to get a feel for the Kobalt 24-volt Cordless Compact Router.  The real test of the tool would be to see if — in harder mediums like oak and PT — I had to slow down my natural routing speed, or if the 24-volt motor would allow me to cruise along.  (I don’t see any point in trying to push a cutting tool of any sort faster than you can control it – that kind of “test” doesn’t have any real-world relevance.)

At the highest RPM, I first tried a ½-inch straight (mortise) bit in the two mediums, adhering to the best practice of making multiple passes and nibbling a bit (no pun intended) off at a time.  In the hard oak and PT, I never had to slow my normal work pace (you don’t want to cut with a router too slow, either, or you’ll burn the wood).  My conclusion was that for the soft woods that I normally use, I’d have no problem at all with enough power.  Same experiment with a 3/8 roundover bit on both mediums; same result.

I didn’t have an in-place door or window casing that I wanted to run a bit over, but I did want to see how easy the router was to handle when working overhead.  The photograph below shows the tool rounding over the edge of some 2X KD stock at height, and this Kobalt router surprised me with how easy it was to handle—I’d actually expected it to be less balanced and harder to use in this position.  So good to go there. 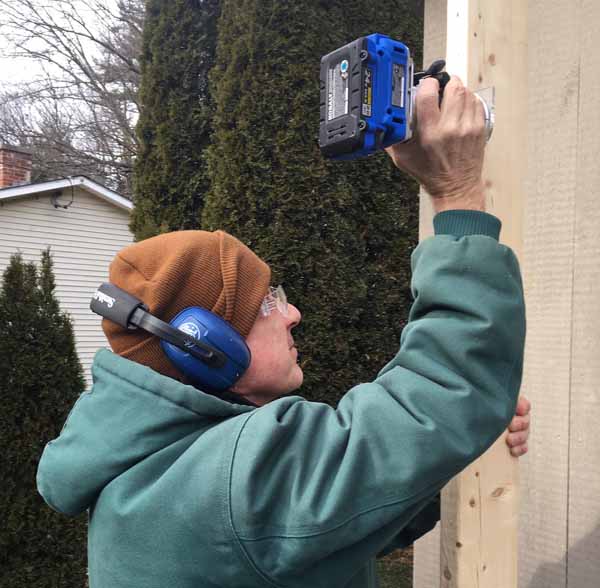 I like the Kobalt 24-volt Cordless Compact Router.  It’s going for $119 now at Lowes.  It does everything that I want in this class of tool, and delivers plenty of power.  It’ll get plenty of use.

The one thing it doesn’t have is a plunge base.  Kobalt has been getting feedback that it would be a great addition to this tool, and I’m hoping to be able to pick one up soon.