The Kobalt 24-volt brushless handheld planer (Model #KPL 124B-0) is a modern version of an ancient carpenter’s tool.  In fact, do you know what the symbol of carpenters and carpenter’s guilds in the pre-20th century era was?  You might be tempted to say a hammer, but you’d be wrong.  It was the plane.  Carpenters then toted around whole boxes of them, and using them was a matter of some skill in which they took justifiable pride.  Maintaining them probably took even more skill.

Today there are some woodworkers who want to do things the old-fashioned way, using only hand tools, and for them finding an old plane in good shape at a tag sale is like finding gold.  These woodworkers tend to be either very high-end craftsman who get a premium for their old-timey methods, or people who do woodworking for the Zen of the experience.  There’s also a solid place for hand planes in any woodworking shop still, but much of the planning these days in production shops is done by the power planer. 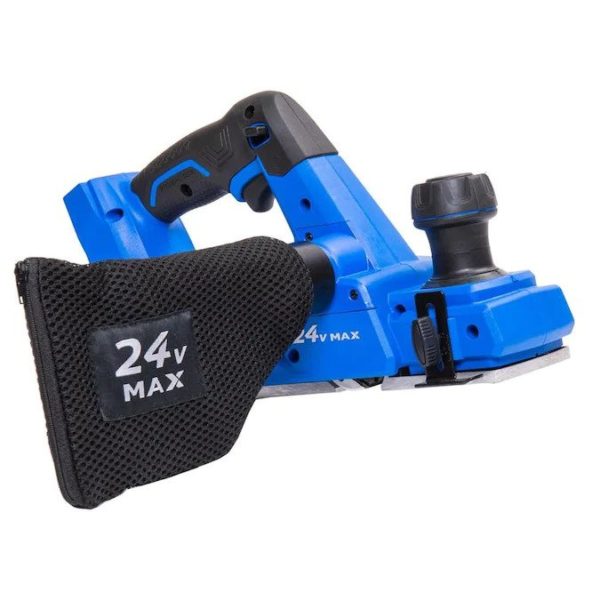 One of the necessary tools

A power planer is one of the tools that every pro needs.  From production framers straightening the line of wall studs or ceiling joists, to general carpentry contractors and remodelers shaving doors, trim, and cabinet frames, the power planer is a necessary tool.  A DIYer who tackles a variety of carpentry projects will also eventually find that a power planer is the right tool for some jobs.

Power planers have been described as aggressive belt sanders, and they fall somewhere between a saw and an orbital sander in terms of material removal.  They can be used as finish tools, and are often so used in trimming door edges or cabinet frames (as mentioned), but as often they will prepare a surface for final sanding or for a thickness planer.  With skill you can flatten even a wide workpiece, eliminating the need for a wide jointer or proficiency with a jack plane.  (In fact, a power planer is really “just” a hand held, upside-down, narrow jointer.)

When you need one, you are really glad to have one!

Finally, cordless is a great way to go with a power planer.  As we’ve discussed, cordless is best when you have to bring the tool to the workpiece, as is often the case with a planer.  (As opposed to bringing the workpiece to a fixed tool location, where corded tools are fine.) 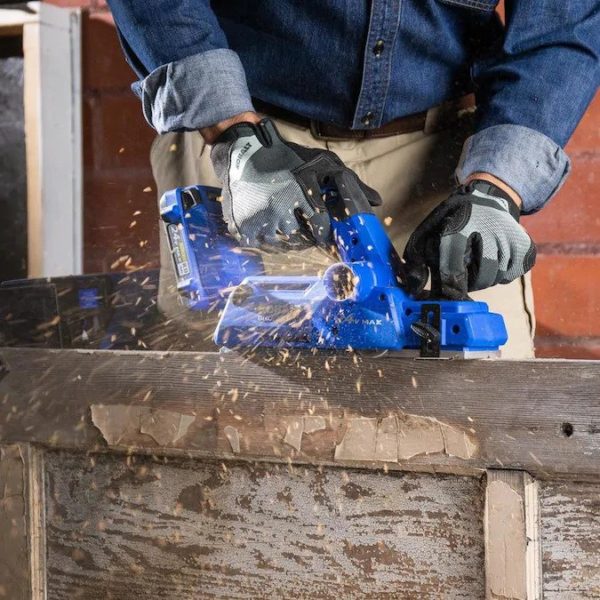 The Kobalt 24-volt brushless handheld planer is a good-quality entry in this space.  Kobalt, as we’ve noted, has been making a name for itself as a store brand (Lowes) that delivers above its price point.  This planer is one of the new 24-volt brushless tools that Lowes recently introduced, running off of 24-volt batteries that incorporate an extra battery cell.    Here’s the specs: 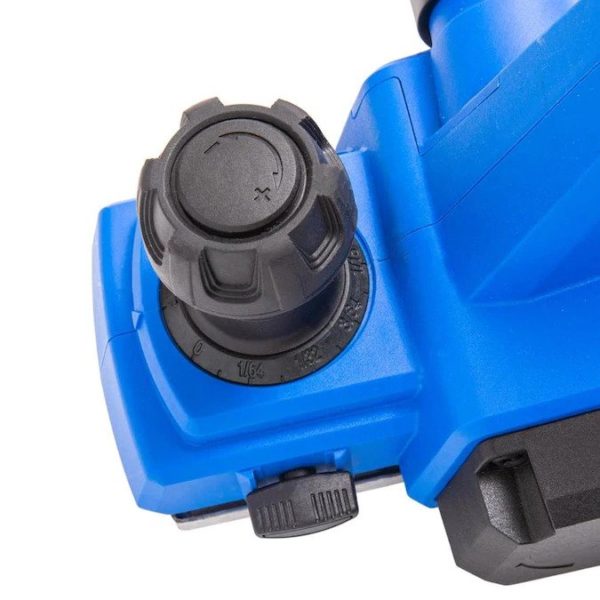 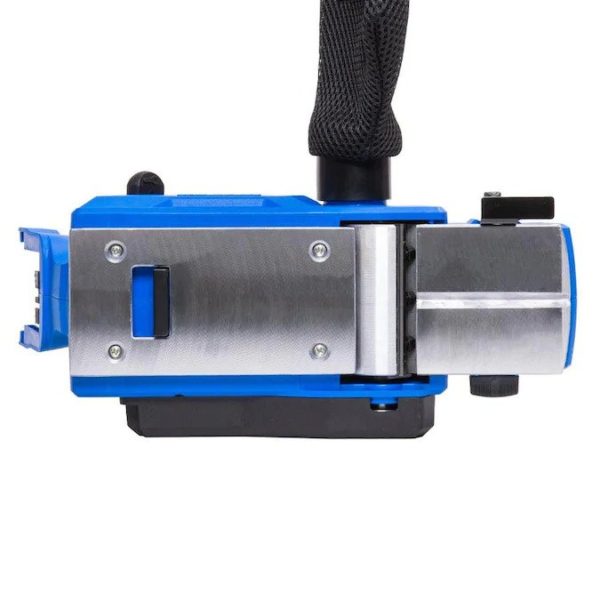 It was too trivial to evaluate the Kobalt 24-volt brushless handheld planer on a piece of soft, narrow wood like 1X or 2X KD stock.  Instead I mostly tried it out on two other pieces of test medium: 4×4 PT and 4×4 oak.  Since these two workpieces were wider than the blade the tests runs engaged the full width of the blades, skewing the performance downward compared to normal workpieces of less than the 3¼-inch blade width.  Keep that in mind when reading below.

Power/speed  The least amount of material this planer will remove is 1/256-inch, and the maximum is 5/64-inch.  In the lower and mid-range of cut depth I could run the planer over these two test mediums as fast as I could control the movement of the tool.  As I approached 5/64 of cut depth I had to slow down to about half as fast as I could otherwise control the planer, but this is pretty much the case with all the power planers I’ve seen.  Bottom line: plenty of power here.

Chip management  The bane of all power planers is the tendency of the chip chute to clog up when the cut depth — and thus the chip size — increases.  At the mid and low range of cut depth the planer shot the smaller chips out willy-nilly.  At maximum cut depth the chute clogged after about six linear feet of work.  Again, this is pretty much what we see with all planers, so the Kobalt unit is on par here.  You simply have to use extraction at these higher cut depths if you can’t stop frequently.

Noise  I was pleasantly surprised with how quiet the Kobalt 24-volt brushless handheld planer is.  I didn’t measure the dB levels, but I suspect that OSHA would be fine with me running it without ear pro.  Eye pro though: yeah, you should always wear eye pro!

Ergonomics  The planer is well balanced, so much so that there’s nothing really to comment on (that is, there’s nothing that feels weird or distracting).  The safety switch, like all safety switches, has a short learning curve, but it’s easy to get the hang of.  Now, a safety switch is not supposed to operate completely intuitively – that would defeat the entire safety aspect of it.   And you really do want a safety on a tool that can remove an entire finger (or worse) before you even suspect that something might be wrong.  The rubber over-mold is grippy, and all handles and manipulation aspects are well-sized and well placed.  High marks here.

Reasonable people will differ on the desirability of the spring-loaded rest protruding from the rear shoe.  Some people love these rests because they help to save blades, while others dislike it because it gets in the way of the way they use a planer.  The best of both worlds is with rests that can be manually locked down, but this planer doesn’t have that feature.  That’s one improvement I’d like to see.

Edge and rabbet guides  The provided edge and rabbet depth guides work exactly as you’d expect and want them to, and rabbet cuts (“rebate” cuts in Great Britain) are easy to make with them. 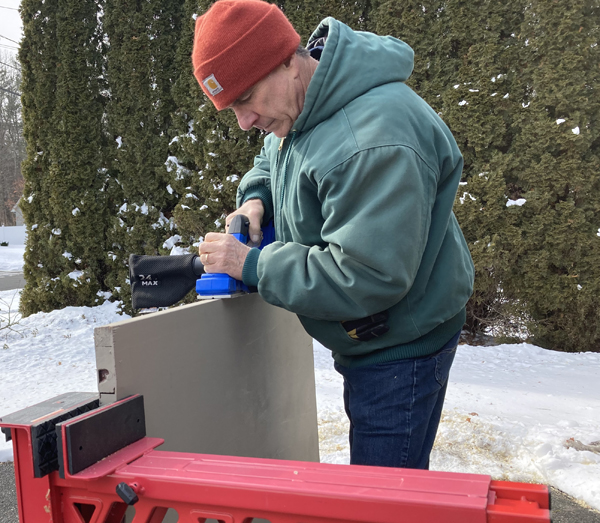 This is a tool that I can easily recommend.  It does everything that a power planer is supposed to do, all of it well.  The price is good.  The warranty is generous.  If you’re in the market for a power planer, give it a good look.