By ralph mroz on Home Maintenance

The Craftsman V20 18-inch Cordless Pole Hedge Trimmer (Model CMCPHT818D1) is a handy tool that has made my life easier (and safer) for a few days a year.  I’m not a professional landscaper so I speak as a homeowner here.  Bottom line: I’m quite happy with this tool, and I’d suggest that you look at it for your own needs, Especially for Fall and Spring chores. 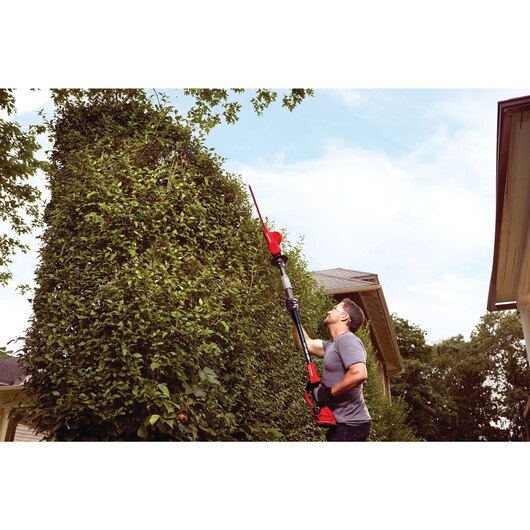 In the old days…

In the old days (by which I mean when I was very young) electric hedge clippers were a new thing.  As a kid I had the hand-tool version, which frankly was a serious pain the patootie to use.  Electric hedge trimmers were a real Godsend then, and most people today have grown up with them.  Now, of course, cordless versions are the thing to have, a long extension cord also being a pain to manage.

Of course serious horticulturists, and those with OCD, still use the hand-tool version at least occasionally; if you do, Craftsman continues to make a good pair.  But mostly I see them relegated to props in horror movies.  But I suppose there’s a little Freddie Kruger in each of us.

The Craftsman V20 18-inch Cordless Pole Hedge Trimmer is a 79-inch-long tool (18 of those inches being the blades).  The grip is comfortably padded with a rubber-like material in the right places, making the grip very comfortable to hold.  The tool comes in two pieces; the lower part, comprising the grip, controls, and battery screws into the forward part which contains the motor and blades, which themselves can be tilted into five positions (two in each direction from straight). 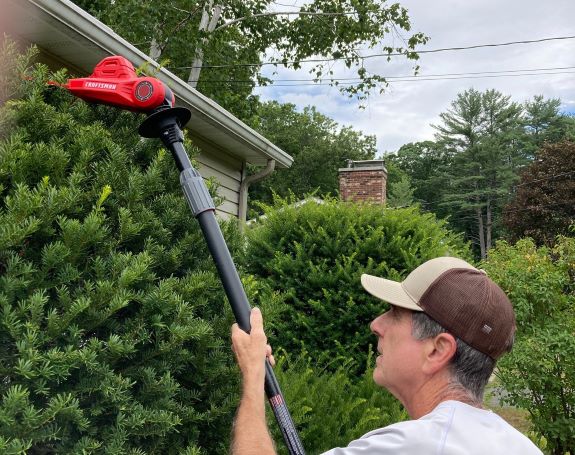 There’s padding in just the right place for your forward hand, and the controls and adjustments are well-thought-out and easy to use.  There’s the (undoubtedly legally mandated) hand guard to prevent you from sliding your hand into the blades (which would be pretty difficult to do anyway), but then it doesn’t interfere with anything either.  All-in-all, Craftsman got the ergonomics of this trimmer right. 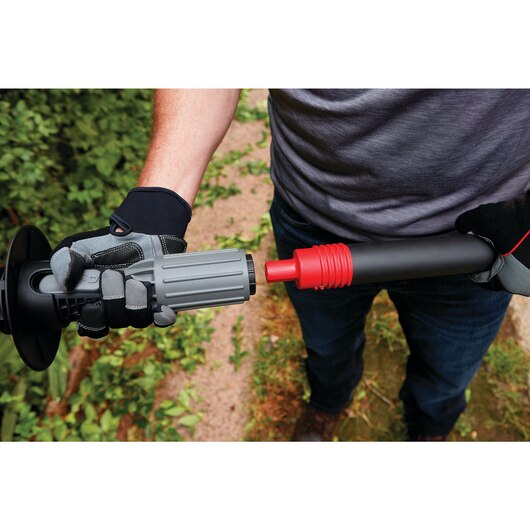 The Craftsman V20 18-inch Cordless Pole Hedge Trimmer performs pretty much as we’ve come to expect hedge trimmers to – there were no surprises.  That’s a good thing because modern hedge trimmers tend to perform pretty darn well.  I did not push the tool to see how thick a stalk it would cut because that’s not an appropriate use of a hedge trimmer (see below).  I used it on the hedges around my house for normal trimming and it cut cleanly, evenly, predictably, and reliably.

The trigger and safety were both easy and intuitive to use – often on a power tool that’s the thing that designers will get wrong, but Craftsman got it right in this case.  The handle was ergonomic and the padded holding section on the pole is well-placed.  I really had no issue using it. 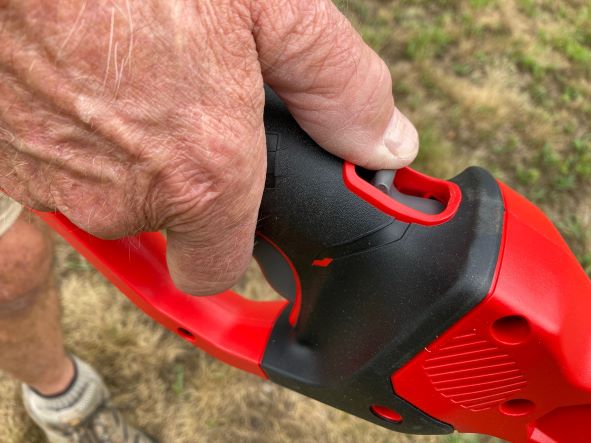 But there are a couple of limitations to this kind of tool – all of them, not just this Craftsman model — which I did run into, both related to the fact that this is a pole-based tool.  In cramped spaces it may be too big/long for the space, so you’ll want to keep a smaller, more compact trimmer handy.  And because the motor is at the far end of the pole, rather than under your hands, the heaviest part of the tool is at the end of a 44-inch lever arm (center of the grip to the center of the motor).  Thus it takes more strength and energy to use than a traditional trimmer; in other words, the advantages come at a cost.  In other words, TANSTAAFL!

I think that the Craftsman V20 18-inch Cordless Pole Hedge Trimmer is a valuable addition to any homeowner’s armory of tools.  It’s invaluable when you need to trim the top of tall hedges; indeed it’s safer and less clumsy too.  It’s also the long trimmer you’ll want to get into deeper areas, perhaps ones that other bushes or obstacles make it difficult to get into.  I’m not giving up my smaller trimmer though, because I don’t think this one replaces it.  But it’s certainly a welcome compliment to it, in that, as I said at the beginning, it makes the most difficult part of my hedge trimming days considerably easier and safer.

Let me emphasize that last sentence.  With a usual electric trimmer, one not pole-mounted, how do you trim the tops of tall hedges (which of course always need trimming)?  If you don’t have a bucket truck, you haul out a ladder and then lean out as far as you can from it with your trimmer, maybe one-handed, hoping to reach all that needs clipping and not fall onto the ground…with a depressed trigger activating sharp moving blades.  For the safety alone that it provides, the Craftsman V20 18-inch Cordless Pole Hedge Trimmer is worth it! 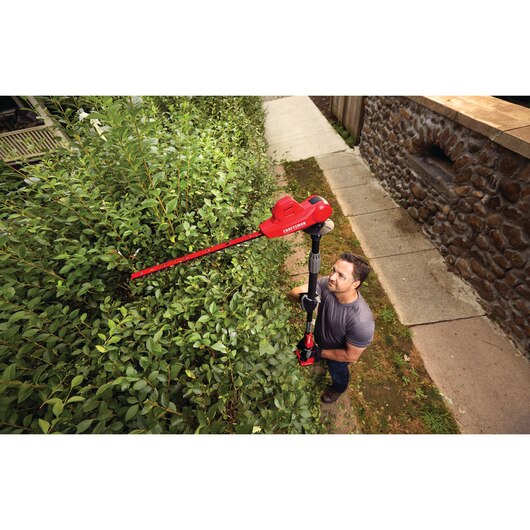 A hedge or not a hedge?

Should you not use a hedge trimmer to trim a hedge?  That depends on the kind of hedge you’re talking about.

According to Wikipedia, a hedge is a line of closely spaced shrubs and sometimes trees, planted and trained to form a barrier or to mark the boundary of an area, such as between neighboring properties.  When I think of a hedge in this way I think of the tall borders on the grounds of something like Downton Abbey.  When I think of a hedge in my own world, however, I’m referring to the smaller ornamental shrubs that I have in front and on the side of my house, and maybe along my front property line.

Basically, an electric hedge trimmer, including the Craftsman V20 18-inch Cordless Pole Hedge Trimmer, should be used to trim and shape the new growth of shrubs (plants) with small, fine stalks.  Trees and shrubs with thicker, woody stalks should not be trimmed with one; for these plants a hand clipper that’s used to cut the stalk back to its origin is the right tool.  Sure, there are exceptions, especially if you don’t care if the shrub is damaged, but as a rule you want to use the right tool for the job.

The kit including a 2-Ah battery and charger is $169 at Lowes.