By Michael Hopp on Tool Reviews Stud finders have been in use since the early 20th century, and all the first ones were all magnetic, relying on internal magnets to detect the wall fasteners attached to studs. In 1977, Robert Franklin designed a revolutionary electronic stud finder that relied on an internal capacitor to measure changes in density behind the wall cladding.

While my old electronic stud finders were not always effective, Bosch decided to change that, introduced an accurate and affordable detector.  The new Bosch D-tect 120 wall /floor scanner sets itself apart by using  wide band radar detection allowing for spot measuring and perfect for working in tight spaces or on little surfaces.

Taking the detector out the case for the first time I noticed how light-weight it is.  The large LCD screen is a nice feature on for such a compact cordless tool.  The tool also comes with a Manufacturer Certificate stating it complies with its specifications and in accordance to ISO 9001, which are quality control standards. I was disappointed to that the unit is shipped as a bare tool.  While I like the option of using 4 AA batteries (included) using the Bosch 10.8V Lithium-Ion battery platform is he best way to go, especially if you already run tools on those batteries.

What’s in the case:

I can sum it all up in one sentence, “I have never used a detector or stud finder so spot on before.”

I used the Bosch D-tect 120 to install base molding, mirrors, shelves and cabinets.  Every fastener that was driven in hit the studs perfectly.

One project, I was hanging a mirror and the little electrical symbol popped up on the screen showing the Romex in the wall feeding the  receptacle below.  I had great success using the Bosch D-Tect 120 as a stud finder in the plaster setting.  The detector has audio beeps that can be muted for a slight operation.

In the muted mode there is a led indicator at the top of the detector that changes color to advise you what it’s detecting on the wall.  For insistence Green is hollow or in a stud bay, Orange you are close or on the edges and red is on the stud.  The screen will also show a cross with circles around it, but when you see a small square display over the cross you are on the center of the stud/object you are detecting for.  Another benefit is you can move the scanner up & down, left & right.

The concrete setting to find conduit in a block wall did not go as flawless as the drywall setting.  My result in this test was about 50/50.  I had a little learning curve with this button.  After using it on the block wall I was able to get the hang of it detecting the conduit.

My first suggestion would be some type of pad or felt to the back of the tool.  I would prefer it to be a slide on or clip on for interior finish only.   I found when using the Bosch D–tect that the hard plastic scuffs plaster walls.  I state this because one day I was scanning cement block walls and the next day I was scanning for studs on a finished plastered wall.  My second suggestion would be better ergonomics.   I feel it’s a little awkward when I grasp the half of barrel handle.  My hand wants to extend further , but it is stopped by the back of the unit.

The Bosch D-Tect wall /floor scanner overall performed well, in fact batter than expected.   The wide band radar detection definitely proved itself on my job sites.   The scanner is multi functional to assist you in a wide range of task to complete.   The drywall feature was my favorite option; it worked perfectly and kept me productive.

The Bosch D-tect wall /floor scanner can be purchased from Amazon.com or by clicking this link. The current price is $ 299.99 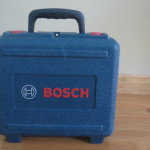 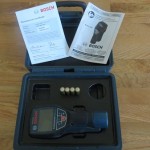 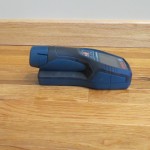 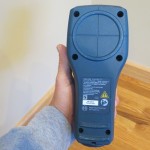 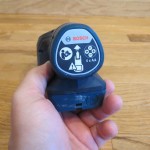 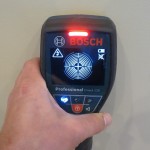 Found Electrical in the wall. 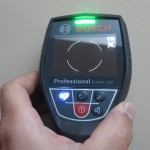 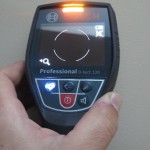 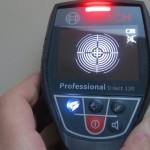 Michael Hopp is a registered contractor in the State of Rhode Island. He has been registered for the last 16 years specializing in interior and exterior remodeling, doors and windows. Mike began practicing his trade 25 years ago at William M. Davies Career and Technical High School in carpentry shop. This gave him the opportunity to become an apprentice at Brodeur Window Distributors. Mike continued working at the company for 10 years. During this time he was in charge of the specialty door shop and assisted on service calls. For the last 16 years, Mike has been work as a general contractor in Rhode Island with his company MJH Construction LLC. Even though his background is in doors and windows, his passion is for remodel work.

All posts by Michael »