Ionization vs. Photoelectric Smoke Detection – Which One Is Better?

If your like me you, you have the best of intentions but probably only get around to changing your smoke alarm batteries once a year, not twice as recommended, or worse wait for the “chirp,” to do it. You also never vacuum them or test them, am I right?

Do you even know what type of smoke alarms you have? Or, that having one kind over another can make a difference in getting out safely in a home fire?

Last year, the U.S. Fire Administration (USFA) documented 2,278 civilian deaths in home fires. Smoke alarms, provide occupants and early audible warning needed to safely escape from fire. The vast majority of residential fire fatalities are due to smoke inhalation, not from the actual flames and almost two-thirds of fire fatalities occur at night while folks are sleeping.

There are two types of smoke alarm types, and one is faster at registering smoke than the other.  To understand this better, you need to know that each alarm has a sensor that detects smoke and fire differently. The most common smoke alarm type is an Ionization alarms. This smoke alarm was in my house and is in the majority of houses I work in.

Ionization-type smoke alarms have a small amount of radioactive material between two electrically charged plates, which ionizes the air and causes current to flow between the plates. When smoke enters the chamber, it disrupts the flow of ions, thus reducing the flow of current and activating the alarm.

Ionization alarms are more responsive to a flaming fire and use “ions,” or electrically charged particles, to detect smoke in the air. Ionization smoke alarms are found in most homes because they are cheaper to purchase, and most folks don’t know the difference between the two types of detectors.

The second type of detector is the photoelectric smoke alarm, which aims a light source into a sensing chamber at an angle away from the sensor. Smoke enters the chamber, reflecting light onto the light sensor; triggering the alarm. Photoelectric smoke alarms are most effective and sound faster when a fire originates from a smoldering source.

Most house fires start as smolder fires and can result from circumstances such as, but not limited to:

Smoldering fires create a lot of smoke which can fill a home with dangerous gases before a fire ever erupts. It is during this time that a Photoelectric smoke alarm will sound. What most people do not know is that studies have shown that a Photoelectric smoke alarm alerts smoke sometimes 5-minutes or more, before an ionization smoke alarm. Smoke has been coined the ” Silent Killer” by firefighting personnel and often times minutes can save lives. Which Smoke Alarm Is Best?

Each technology has its advantages and can offer an earlier warning over the other, depending on the origin of a fire. The National Fire Protection Association says the best smoke alarm is a combination of both and advises folks to install both alarm technologies in your home. They argue that it is difficult to determine which type of fire you may have in your home, a smoldering fire or a flaming fire.

A “fast flame” fire is a fire that is based on accelerant, such as gasoline, cooking oils, grease, and paper fire. A smoldering fire is the early stages before open flames develop and is characterized as slow moving with significant smoke.

There are a couple of ways install both technology detectors:

There are also no industry standards for setting the individual sensor sensitivity in dual sensor alarms. This means that a dual sensor alarm could have a non-functional ionization sensor, but as long as the photoelectric sensor works, it still meets the national standards developed by Underwriters Laboratories (UL). Which Smoke Detector Do You Currently Have?

The simplest way is to look at the manual if you still have it. Alternatively, you can look at the back-side label of the alarm if the model number has an “I,” -then it is an ionization alarm. Ionization alarms all contain a trace amount of a radioactive material, Americium 241, and always have a small warning label on the back.

20 percent of homes have detectors that do not work or are missing batteries, and two-thirds of reported residential fire deaths occur in homes without working smoke alarms, or with no smoke alarms at all.

Here are a few tips to keep you safe: Replace and Upgrade your Smoke Alarms Every 10 Years

Technology gets better every year and if you have a smoke alarm older than 10 years you may be taking a dangerous risk. Older smoke alarms do not operate efficiently as newer models and often susceptible to false alarms. Any smoke alarm that is 10 years or older should be replaced as well, regardless of type.

TIP – I always write the date of any smoke alarm I install on the inside lid of the battery cover. 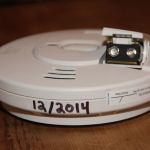 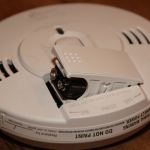 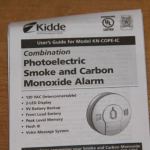 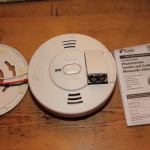 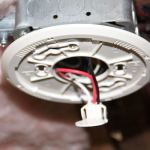 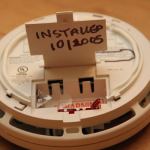