Stanley has recently improved on the indispensable all-in-one multi bit screwdriver with the Stanley Fatmax Hi-speed Ratcheting Screwdriver. Inside the belly of this beast, there are 12 bits to choose from, which should be enough to tackle any home improvement project. It was released in September 2013 and retails for approximately $19.99.

Not Your Ordinary Screwdriver

The Stanley Fatmax Ratcheting Screwdriver is not your ordinary screwdriver. The ratcheting mechanism features a 4:1 gear ratio, allowing the user to drive or remove screws with 4 times more speed. You operate the HiSpeed screwdriver by grasping the gearbox in the front of the device and then turning the rear handle.

There is a ring behind the gearbox which allows you to quickly change from forward to reverse—I would have liked to see the direction indicators painted yellow since they were hard to see when painted the same color as the screwdriver.

The textured rubberized handle was large and easy to grasp firmly, which definitely assisted in the operation of the device. Those with arthritis and carpal tunnel would probably appreciate the ratcheting mechanism most since it minimizes the amount of wrist and hand movement necessary to drive screws.

Stanley provides storage for the 12 bits in the rear of the handle. A 1/4 counter-clockwise turn of the yellow cap enables you to quickly remove the storage device. The 12 bits each have a place to fasten them. Removal of the bits from the storage device is easy and each bit is magnetic, so they remain secure in the handle when put into action. It should be noted that the tip of the bit itself is not magnetic. When done, removing the bits from the handle was not difficult and could be done simply with a bare hand. There are three of each kind of bit: flat (5mm, 6.5mm, 8mm), philips (1pt, 2pt, 3pt), square (1pt, 2pt, 3pt), and torx (T10, T15, T25).

In my opinion, access to a rugged multi bit screwdriver is a requirement for every homeowner. The Stanley Fatmax HiSpeed Ratcheting Screwdriver is a very practical and worthwhile choice for those looking for one screwdriver capable of performing many different jobs. It would be beneficial to have in the car, the toolbox, and the obligatory kitchen “junk drawer”.

John Peachey is a 23-year veteran teacher, a club manager, and a big fan of technology and gadgets. He especially enjoys completing DIY projects around the house. 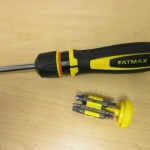 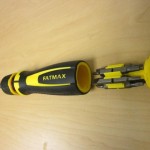