By Robert Robillard on Electrical, Home And Personal Safety Every year there are over 50,000 electrical-related fires, and 3,300 of them involved an improperly used extension cord.  People simply put too many items on extension cords, overloading them, which creates excessive heat and creates a spart and starts a fire. The vast majority of residential fire fatalities are due to smoke inhalation, not from the actual flames and almost two-thirds of fire fatalities occur at night while folks are sleeping – that’s scary!

I usually find myself using and setting up numerous extension cords around the house setting up for the winter holidays.  The cords get used on decorating activities from up-lighting a wreath, to installing string lights on evergreen roping, Christmas trees, and other lighted displays. I recently started using SmartCord Safety Extension Cords in my home. The SmartCord Safety Extension Cord utilizes a built-in heat sensor,to detect heat build up at the plug, prior the circuit catching fire or causing a spark.  If the temperature gets too hot, 130-degrees or more, an alarm sounds and a red LED light activates to alert occupants that the cord is overloaded.

Both the male and female ends of the SmartCord have LED warning lights, audible alarms and even a test button to let the user know the alarm and LED are working. The alarm continues to sound until the power is shut off or the hot plugs are removed.

The end of the extension cord head contains 2 outlets on one side and 1 outlet on the other.  The cord is 16-gauge wire and rated at 13 amps, I do wish that the cord was offered in a slightly heavier gauge with three-prongs.

The cords I tested were 6-feet long and the female end had safety shutters that stop access to unused contacts. These cords come in different lengths and colors. The SmartCord safety extension cord, like your smoke detectors, is a safety device that helps protect your home.

The SmartCord also provides you an alarm but before the fire starts and before its too late!! 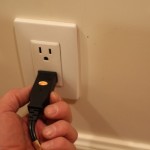 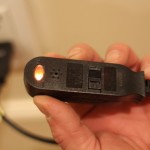 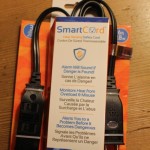