The RYOBI 18-volt ONE+ compact brushless ½-inch hammer drill we’re looking at here is model PSBHM01.  It’s only 6.7 in. long and compact, providing good access to tight workspaces. RYOBI claims that this compact hammer drill provides up to 2X more runtime than the earlier brushed model (model P214). It’s equipped with a brushless motor that delivers up to 400 inch-pounds of torque.  Its main features are: 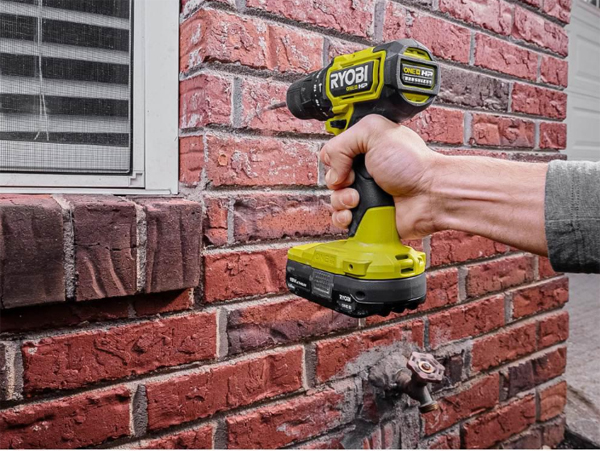 Before we dive in, let’s first avoid some confusion.  RYOBI currently offers three 18-volt hammer drills, including this one.

This hammer drill, the PSBHM01 ONE+ HP Compact Brushless 1/2” Hammer Drill, delivers 2X longer runtime and faster speeds compared to the P214. It is also lighter weight and up to 29% more compact compared to the P214.  It has faster drilling speeds in drill mode and in hammer mode, aiding drilling through concrete, brick, and block at up to 27,200 BPM.

Finally, the PBLHM101 ONE+ HP Brushless 1/2″ Hammer Drill is the most powerful RYOBI cordless hammer drill with 750 inch-pounds of torque. This hammer drill delivers up to 31,000 BPM and 2100 RPM for faster drilling and driving speeds. There are also a number of premium upgrades like the ratcheting metal chuck, die cast metal gear case, and upgraded auxiliary handle.   This model retails for $119.

What I take from all this is that RYOBI is positioning this hammer drill, the PSBHM01, as their entry-level brushless hammer drill, targeted at DIYers and occasional users.  That said, I’ve said many times in these pages that I’ve lost track of the number of professional trades people — across all the trades — who’ve told me that they use RYOBI tools with great satisfaction, albeit for tools that they don’t use day-in/day-out for hours a day.  In other words, my experience is that the RYOBI line, while Home Depot’s entry-level power tool brand, has tracked the quality evolution of all power tools such that it can often be considered prosumer-level. 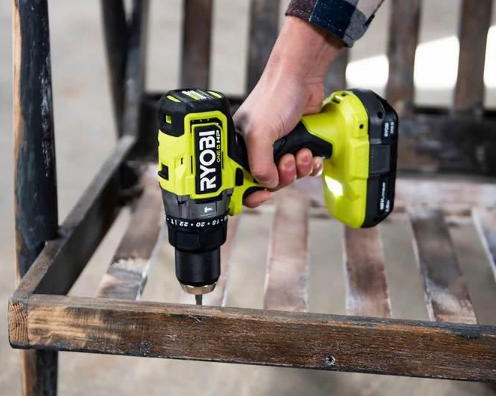 ONE+ HP is the new high-performance series of tools from RYOBI and The Home Depot, with two lines. The ONE+ Compact Brushless tools are compact (but powerful) tools for tight applications, while the ONE+ HP Brushless Tools provide maximum run time, maximum power, and maximum durability.  All ONE+ HP tools are fully compatible with all 18-volt RYOBI batteries.  This particular drill doesn’t have the extra contacts to access the smart electronics in the newer LITHIUM+ HP High Capacity Batteries.  Nonetheless, it works just fine without it, as I show below. 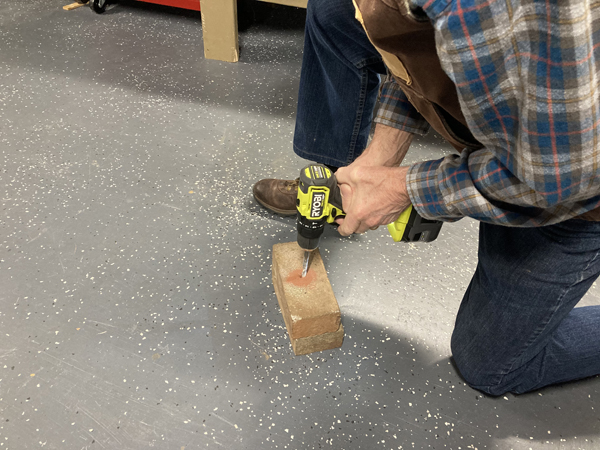 Who needs a hammer drill?

Anyone who needs to drill holes in concrete, block, brick, or other masonry structures.  While that includes every contractor in almost every trade, it also includes home owners, because almost every home has some sort of masonry foundation, slab, walls, or all three.  Sooner or later most homeowners will to want to attach or hang something from them.  There are a couple dozen ways to do that, but the easiest and usually most secure way is to drill a hole to accept a masonry fastener or fastener sleeve.

I’ve sometimes had to make do with other methods, but boy did I wish I’d had a proper hammer drill on those occasions.  It’s the right tool for the job.

Most homeowners won’t need an SDS-chuck rotary hammer (a high-power hammer drill), but will be well served by a hammer drill and standard masonry bits for their masonry-fastening projects. 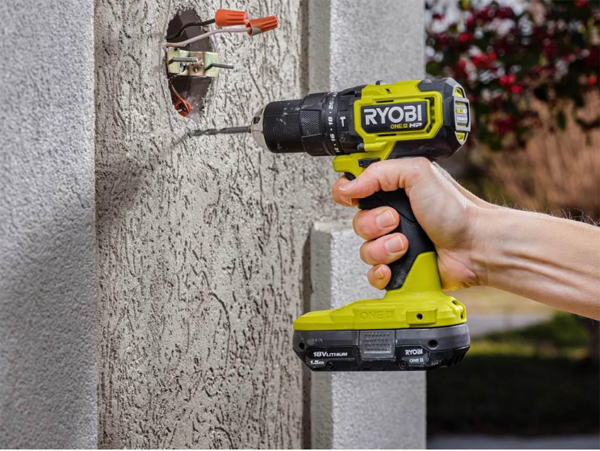 I quickly want to touch on the differences between these three tools in case there’s someone new to the trades reading who’s confused by these three terms.

Impact drivers incorporate hammering-type actions that “hammer” a (usually fastener) bit around in the rotary direction, adding impact to the spinning force of the fastener-driving bit.  Typically they have quick-change chucks.

Hammer drills have a mechanism that causes the chuck to move back and forth in line with the bit, literally hammering the bit as it spins (usually measured in “blows per minute” or BPM). Hammer drills almost always have the ability to turn the hammering action on and off, so they can be used a regular drill in drill-only mode (but they don’t have a hammer-only mode).   Hammer drills typically have, like most drills, a three-jaw chuck.  They are usually used for drilling holes of up to ½-inch.

Rotary hammers are the big brother of hammer drills, used for jobs where you need a lot of power to hammer a spinning bit into material, and usually when you are drilling holes over ½-inch and up to 2-inches in diameter.  A rotary hammer will hammer more slowly than a hammer drill, but each blow is more powerful.  They usually use special “SDS” chucks and bits, and can be used in hammer-only mode, usually with a chisel bit (but they don’t typically have a drill-only mode).  They aren’t thought of as home-owner class tools. 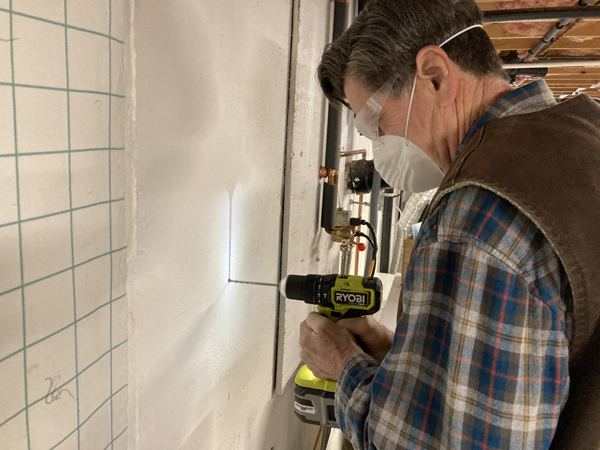 The RYOBI 18-volt ONE+ compact brushless ½-inch hammer drill operates like most hammer drills on the market, with all the controls where you’d expect them on almost any drill, so there’s no special learning curve or anything to go “oopsy-daisy” in use.  The torque/hammer selector is easy to operate and clicks into each position.  All the indicators are industry standard.  The drill is well balanced and the rubber over-molding is comfortable, grippy, and in all the right places.  The LED light is located on the top of the battery housing where it freely shines past your hands and onto the work area.  The clutch works well, kicking out at the right power level at each setting. 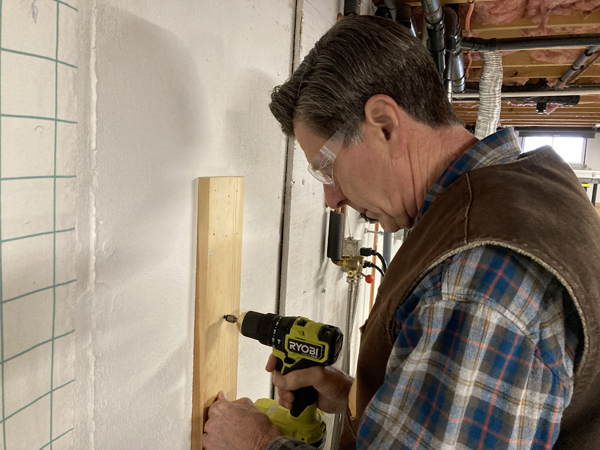 Can this RYOBI 18-volt ONE+ compact brushless ½-inch hammer drill drill well in normal (non-hammer) drilling applications?  Frankly that’s not even an interesting question.  After all, it delivers 400 inch-pounds of torque.  My elderly cordless drill, which I’ve used for at least 15 years now, has only 300 inch-pounds of torque and it’s never failed to drill well for me in any material.  But yes, I did use this drill to bore a gaggle of 1-inch holes with various types of bits in both KD and PT, and it never stalled.  So yeah, it’ll drill.  Just fine.

The more interesting question is how it performs in masonry materials.  After all, the reason that people will buy this drill is because of its hammer capability, and in order to drill in concrete or some other masonry medium.  I assumed drilling for and driving Tapcons would be the most common application for this drill, and that’s why I ran the drills (pun intended) that I did below.

I had access to two concrete foundations to experiment on.  One poured in 1962 and one poured in 1986.  I don’t know the specs on the concrete used, but clearly both were well-cured.  Using a 3/8-inch brand new Milwaukee masonry bit, the RYOBI 18-volt ONE+ compact brushless ½-inch hammer drill bored 1½-inches into the 1962 foundation in about 10 seconds, and in about seven seconds in the 1986 foundation (depending on whether or not I hit aggregate).   A more typical hole (for a ¼-inch Tapcon) would be drilled using a 3/16 bit, and that went a whole lot faster.

Using that 3/8 bit again, it flew through 1-inch concrete block and 2-inch brick in just a couple of seconds.  My conclusion: for just about any DIY job, or for that matter, most residential remodeling upgrades, the RYOBI 18-volt ONE+ compact brushless ½-inch hammer drill performs.  Despite its small size, it holds its own.  Just make sure you use masonry bits that aren’t dull. 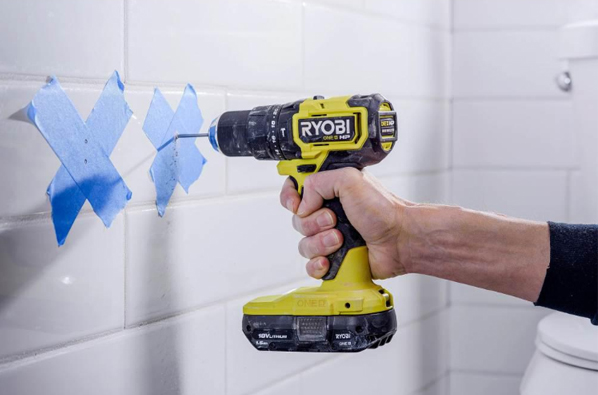 A quick safety reminder.  Silica has been called “the new asbestos”, and it’s the stuff that’s released into the air when you drill (or otherwise pulverize) masonry materials.  It’s bad stuff, and it attacks your lungs causing cancer.  OSHA has pretty strict requirements about silica dust management on jobsites, and even a DIYer should use a mask when drilling concrete, block or brick.  We didn’t used to think about this stuff when I was young, and my father’s generation paid the price.

The RYOBI RYOBI 18-volt ONE+ compact brushless ½-inch hammer drill is a great drill for any homeowner.  Because most homeowners will eventually want to bore concrete (or brick), and because this is a powerful “regular” drill, this hammer drill makes a lot of sense to buy as a primary drill and have all bases covered.  It’s also a great choice for trades people who have an occasional need to drill masonry, and they get a spare “regular” drill to boot.  It is one more example of how far we’ve come in tool technology, even in “entry-level” tools, over the last couple decades.