By William Burns on Tool Reviews DEWALT  has been a powerful leader in the power tool industry, and with the performance of their Variable Speed Top Handle Jigsaw (DW331K)  it lived to their motto Guaranteed Tough, in our field test review.

The review was set up to test the performance of jigsaws, in their ergonomics, stand-out features, and performance.

I have had this  DEWALT jigsaw for the last year so far and have tested it through many different materials from finish carpentry trim boards to rough framing.

This jigsaw has ample power with its 6.5 Amp motor.  I out our Head to Head review this saw came in second place for power.

We were very impressed with the power and cut results in birch plywood and laminate counter top material.

The variable speed on the trigger handle, is a feature most of us liked, with  7 positions to choose from. One of the leading features of the  DEWALT Variable Speed Jigsaw DW331K, is the key-less lever action blade change.  A clamping system that is design in the front of the tool for quick changes of the blade and easy installation.

The all metal front end of the tool is well designed and durable.   The design gives has a “rock solid feel” and the sense that this tool was built for Pros.

The shoe of the DEWALT Variable Speed Jigsaw DW331K is made of a non-marring plastic and protects for fragile material like our laminate test that we did.

The shoe also comes with a anti-chipping insert, which is helpful for precision cutting resulting in less splintering of the material being cut.

Built inside the shoe on the metal base is a half circle hole for a small vacuum adapter to be positioned for close up cleaning of excess dust.  A blower door switch is built into the front end of the jigsaw.

The vacuum adapter seems like an after thought and was not easy to attach.  We feel the DW331K lacks slightly in dust extraction and challenge DEWALT to design a more efficient and better dust prevention system.

The bevel change is a metal bar is attached at the rear of the head of the  DEWALT Jigsaw, and has settings to the angles of 0°, 15°, 30°, and 45°. The bar has some friction when tightening into the  locked position.

The one flaw to the  DEWALT jigsaw is the chord is only 7 feet long, with other brands that we tested having a chord double that size.  A short cord makes it difficult to  maneuver around a work table as well as circular cut pieces and longer rips.

The  DEWALT Variable Speed Jigsaw is not designed with a LED light.

Amazon has the tool for sale at $182.65 and can be purchased here for the DeWalt Variable Speed Jigsaw DW331K.

The  DEWALT Variable Speed Jigsaw DW331K has the power to perform the job for a professional contractor or remodeler.

I use the jigsaw almost everyday in the field and the DEWALT design has yet to disappointed me, it has excellent power, features and accessories. 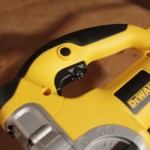 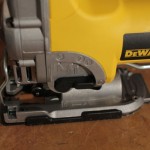 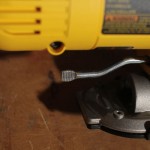 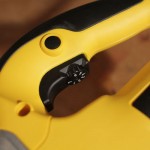 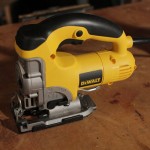 William J. Burns is a June 2011 graduate of North Bennet Street School’s Preservation Carpentry program in Boston, MA. He has worked on many projects including window restoration at the Old State House in Boston, MA and completed many other restoration projects at five Shaker Villages across New York and the New England states. He spent two summers at the Mount Lebanon Shaker Village working exclusively on the 1829 Brethrens’ Workshop.He has volunteered with the Historic Albany Foundation, Colonie Historical Society, Friends of Pruyn House, Shaker Heritage Society, and Cambridge (MA) Historical Society.After years of careful research, William discovered a Shaker tenant farmhouse in Loudonville, New York. Previously unknown by local historians and Shaker preservationists, it has since been identified as a significant part of the Watervliet Shaker Village, America’s first Shaker settlement.William was the preservation carpenter at Canterbury Shaker Village in Canterbury, NH recently for over a year and is now on the ACC team.

All posts by William »